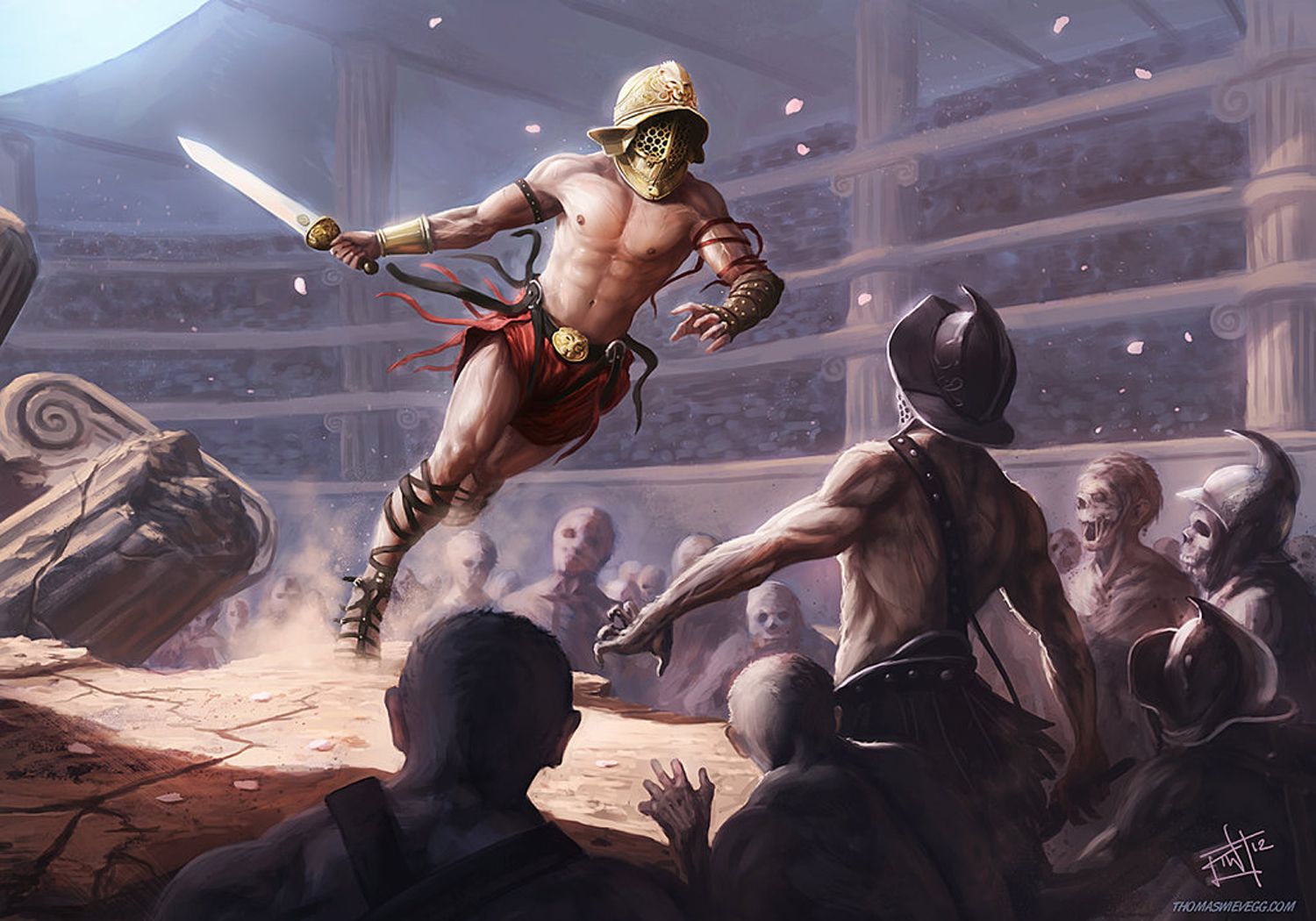 The crowd roars in excitement as the most anticipated match of the evening was about to start. The match everyone was waiting for. Gladiator Drago vs Gladiator Nero! The two best gladiators in the entire land of Roma! This was highly expected to be the match of the decade. The crowd is eager to see blood between these two warriors. The two gladiators stood at opposite ends of each other. Nero at the east gate and Drago at the west. Weapon in hand, they awaited the blow of the horn, signifying to start.

*BADOOOOOOOOOOOOM!!* And there it blows! Let the match begin!​

Nero stood there surrounded by the huge roars that could shake the heavens while his consciousness were all dyed with a blank, his heart covered by some shadow, his feet dug into the sand, waiting for the fight to begin. The arena floor was echoing from the guards surrounding them on horses. Soon the two swordsmen will fight to the death to amuse the populace around them. Nero glanced at Drago while showing a smile knowingly cruelly as he waited for the horn to blow. And then,

Dragomir said:
*BADOOOOOOOOOOOOM!!* And there it blows! Let the match begin!
Click to expand...
For a moment, in the silence, he remained motionless. He tensed and stared at his enemy soundlessly.

On the spur of the moment, he started running lightly in the direction of Drago, and then with the following wind, he ran at full speed as he swung the sword in his right hand and approached Drago in a straight run. The swing was meant to cover a wide area, the strength that was put into that swing was meant to be achieved with both hands. The sword was thrust towards Drago from an unexpected angle.
-----------------------------
Nero Stats;

Drago concentrated on the battle ahead of him. The crowd's deafening roar was unheard to his ears. The rough blood-spilled landscape beneath him was unfelt to his feet. His muscles loosed and relaxed. His blow slow and rhythmic. Eyes closed and head titled upwards. It was his pre-battle meditation. He focused on the battle, anticipating the movements of his opponents, imagining how he himself would react in return. Unlike other gladiators who might meditate for hours in their rooms before their battle has begun, all Drago needed was the 2-minute waiting period that took the signal horn to blow.

Dragomir said:
*BADOOOOOOOOOOOOM!!* And there it blows! Let the match begin!
Click to expand...
In an instant, Drago snapped out of his meditation and was immediately battle-ready. "ARGGGHHHHHH!!!!" Drago let out a ferocious scream! The calmness that he originally retained dissipated from his body and it was now replaced by a raging bloodlust. An unstoppable desire for victory flowed in his veins; his eyes utterly bloodshot. It was battle time and Drago wanted all the smoke.

With an intense focus, Drago watched as his opponent approached him with an overhead downward swing at him. Hmph. Too easy Drago thought. He rapidly drew his own sword upward to meet the swing. The muscles in his arms rippled at the quickness he had with the blade! A clash of strength!

.
#4
Dragomir said:
He rapidly drew his own sword upward to meet the swing. The muscles in his arms rippled at the quickness he had with the blade! A clash of strength!
Click to expand...
Drago to execute his own attack to block Nero's. The attacks that clashed together, considering only power. His attack could not break past Drago's own attack. The impact ran upon his body upon the clash was like being fried by a high-tension current. Both warriors muscles were trained to point where they appeared steel-like, and they were powerful beyond all beliefs.

"AAAAAAAHHHHHHH" A scream escaped his throat as if saying 'I will not lose to you', but victory will not be in his laps until he bestows everything he could devote in this combat. Precisely this what compelled him as in this intensity his threatening surge was increasing exponentially and forcing his clash towards Drago even more.

.
#5
The steel blades clashed with a KA-CHING! The two gladiators were nigh equals with Drago only barely physically stronger than his opponent.

"AAAAAAAHHHHHHH"
Click to expand...
"GRUNGH!" Drago grunts in response. As their blades were still pressed against each, the bloodthirsty gladiator swiftly sidesteps to the left, his opponent's right. All I need is one opportunity to catch him off-balance to give me an opening to his neck. Then, with a swift cut from my blade, IT'LL BE OVER!!!

.
#6
Drago grunts in response. As their blades were still pressed against each, the bloodthirsty gladiator swiftly sidesteps to the left, his opponent's right.
Click to expand...
In the intensity of the battle, Nero was deliberate to not make any rash decisions that may end up forfeiting his life. Just when he thought he's getting the edge in the clash, he felt his sword was slipping away from his opponent's own sword. And then he just realizes as he gave a sidelong glance at Drago's sneak attack. He had no way to dodge this attack when he had just pushed all his strength on front. At this moment, all Nero could do with all his skills was to protect his body before suffering the fatal impact as he quickly brings a rounded knob on the end of the handle sword close to his side where Drago attack was coming from in order defend himself. The unanticipated strike force makes a heavy impact on Nero's hand.

"Tch..." Irritated, Nero, was able to defend himself but what irritated him the most was not able to get the upper hand on Drago. However, it was not the right time to express his distress over the last attack, as he says "Off you go!" between his breaths raising his sword atop his shoulder, putting his strength in his legs Nero moved from his spot with frightening speed. He then unleashed a vertical slash on Drago's left.