‎
#1
I've contemplated on the closing of Guts' story many times while reading Berserk. Whether it be the happily ever after with Casca in a secluded place, continuing adventures with the squads to different lands, or even darker tragedy endings. However, now I've come to a different conclusion, though this had always been an idea in the back of my mind I never really bothered contemplating hard on it.. but I am about 99% convinced that the ending for Guts will be that he'll be the man who'll create the 2nd human empire.

The main antagonist of Berserk, Griffith, had a dream since he was a child to become the King and have his own empire/kingdom. He started up his band of the hawk, and waged wars to try and achieve it. But everything fell apart, and led to him becoming one of the 5 God Hand. Now he's back in physical form through Guts & Casca's child. And after his return back to accomplish his dream of not just having his kingdom, but creating the 2nd empire that spans the entire continent: 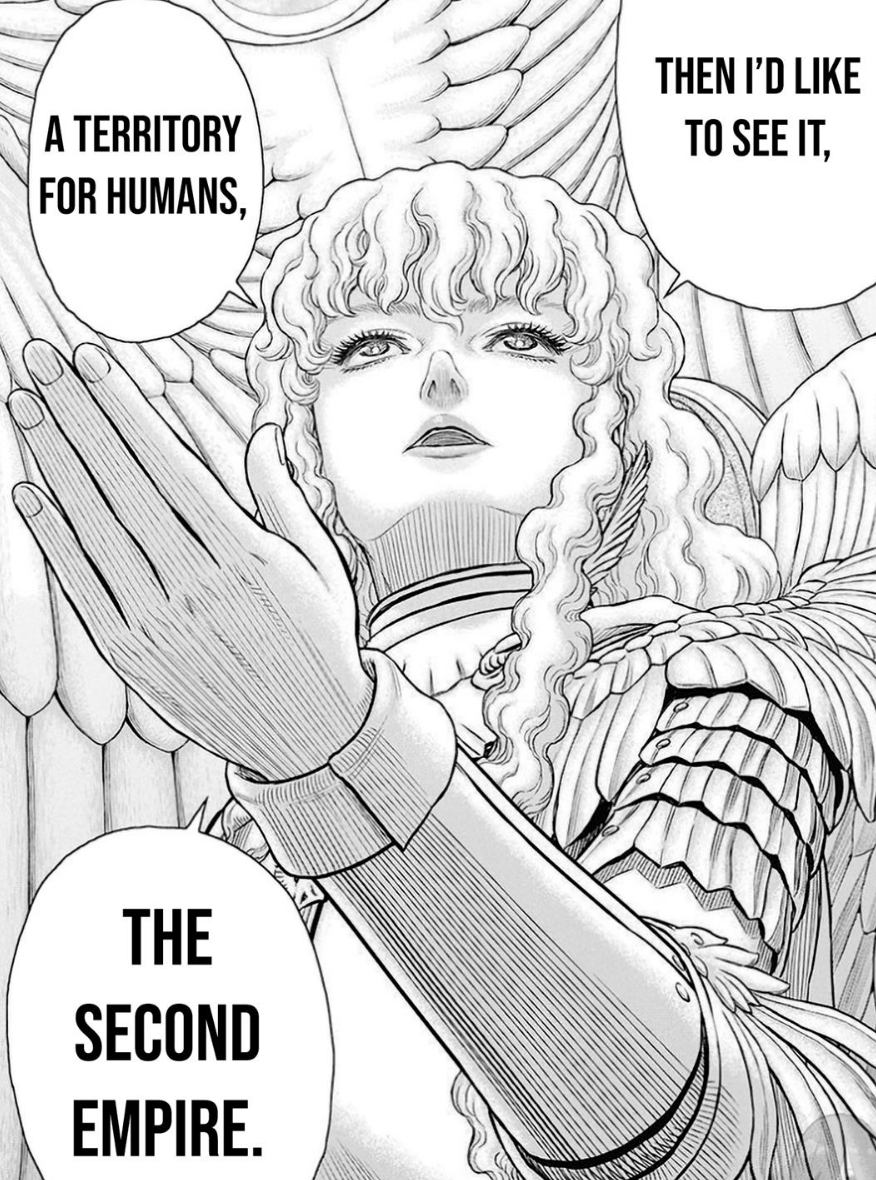 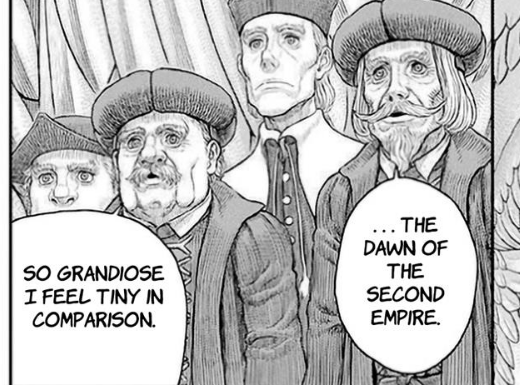 However, despite this dream of his... it is not Griffith's destiny. Griffith as pointed out by our young witch is the Falcon of Darkness who's responsible for bringing darkness to the world. "The angel is the Falcon of Darkness. The master of the sinful black sheep, the king of the blind white sheep. The one who shall call upon the world an age of darkness." Keep in mind outside of the little zone Griffith has secured, the rest of the world is experience traumatic experiences akin to that of the troll village but on a much higher scale, and it's all because of Griffith.

But then the question arises who will make the blind white sheep actually see and lead them properly? Because the blind white sheep will need a leader(s) if they're to survive in this chaotic world where empires and such have been brought to waste thanks to the age of darkness cast upon the world by Griffith.... And this is where it gets interesting, Griffith in the above panel mentions Emperor Gaiseric (also known as Skull Knight), where he wants to accomplish what Gaiseric once did... but the ironic part is the person that is most like Gaiseric is not Griffith, but the man who'll stand in Griffith's way... Guts:


Who is Emperor Gaiseric?

About a thousand years ago, in the "Age of Warlords", the main continent that the story of Berserk takes place on was ravaged by gruesome warfare among city-states & various independent tribes which was also accompanied by famine & plague, resulting in the death of 1/3rd of the population: 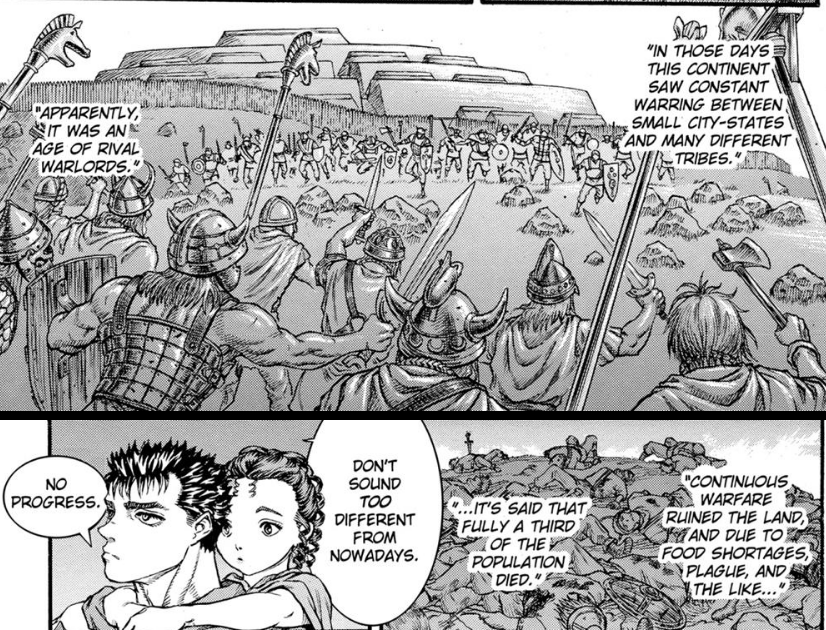 But one man changed all that by conquering the various nations and groups and establishing the 1st and only empire the continent had seen, the man known as Supreme King Gaiseric: 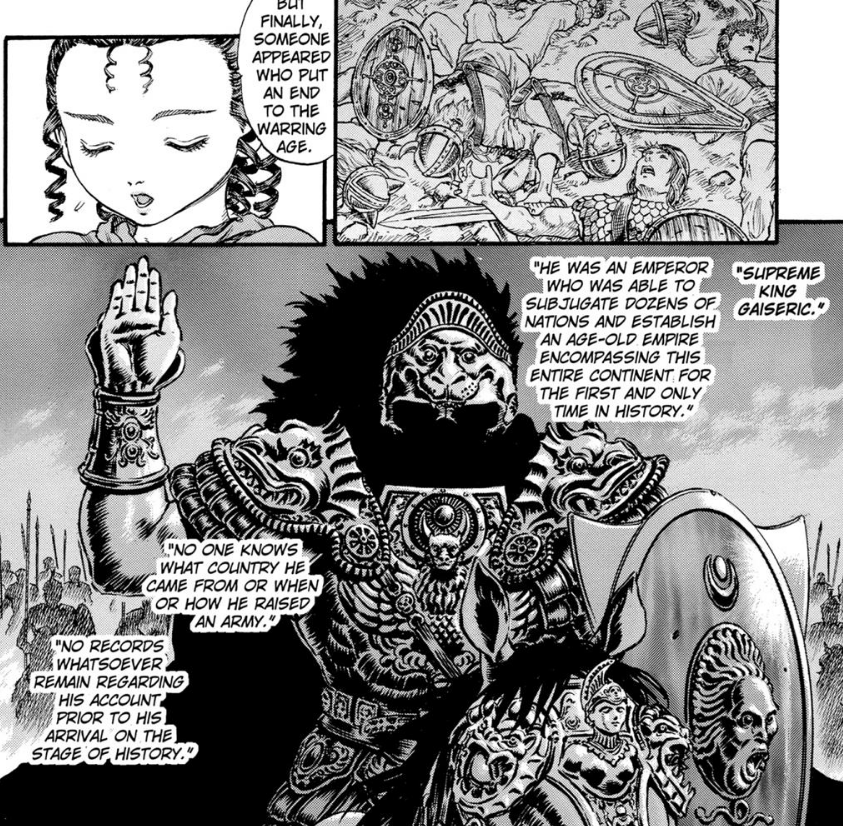 Gaiseric's empire would then be brought down by the "5 angels" aka the God Hand: 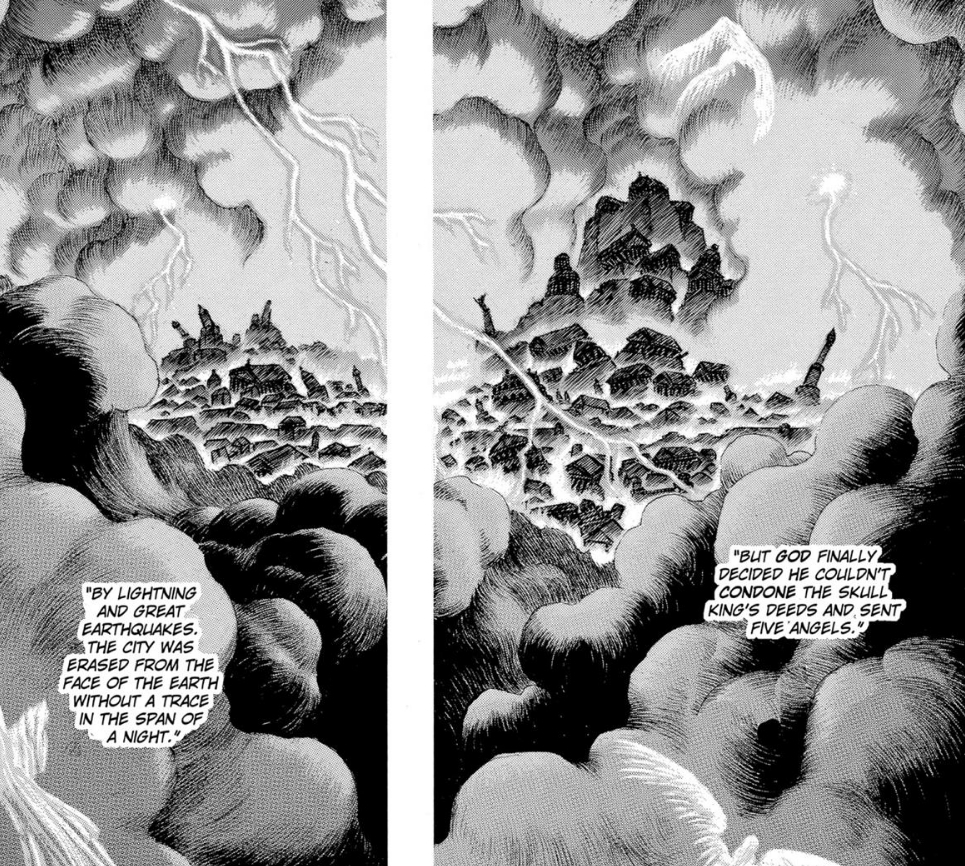 Wearing the armor that Guts wears right now, he met his fate during the eclipse where an inidividual had once been imprisoned by Gaiseric had ascended into a God Hand by calling upon the Eclipse. Which resulted in the sacrifice of Gaiseric's beloved and countless others: 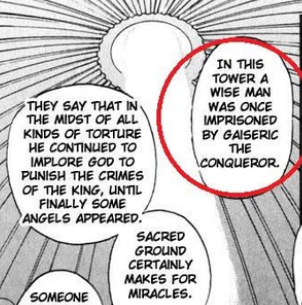 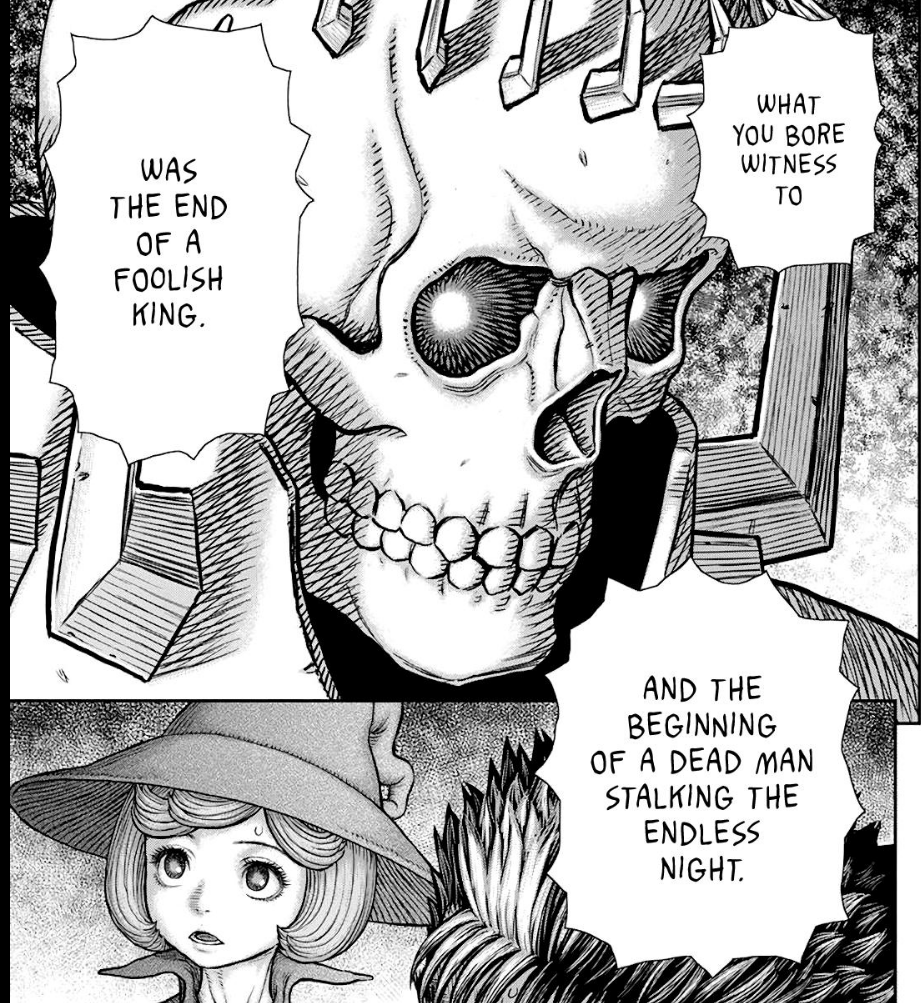 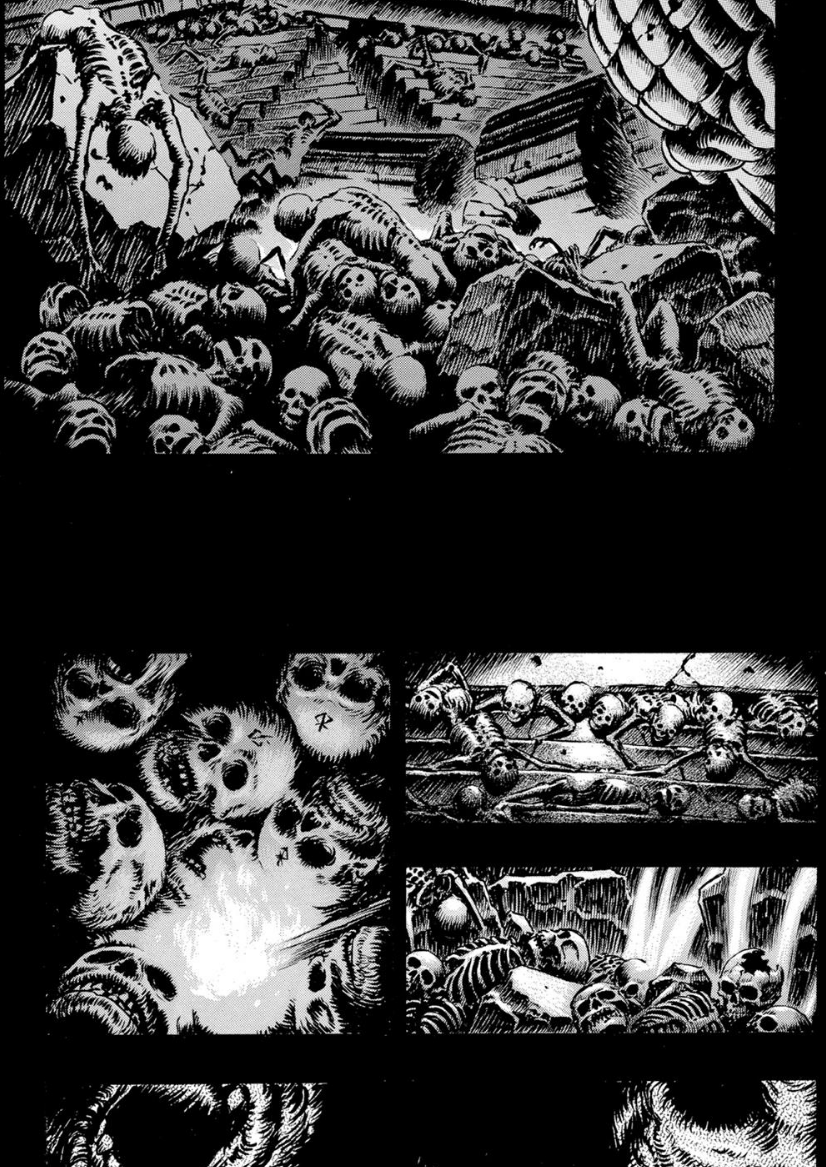 This also led to Flora being exiled from the Elf Island because of doing something forbidden for Gaiseric. After which Gaiseric would continue to fight against the Apostles for centuries, aiming at the God Hand every opportunity he could get. 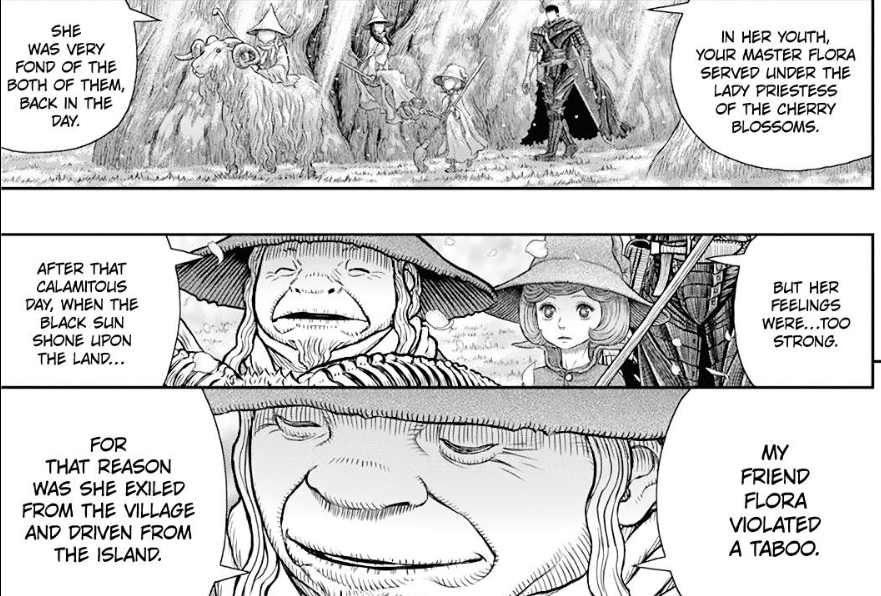 Him and Flora would continue the fight against the Apostles to such an extent that Gaiseric's body would be destroyed by the Berserker armor, leading to the making of a new armor by the Dwarf at Elfhelm. An armor that would store the soul of Gaiseric and allow him to continue his fight: 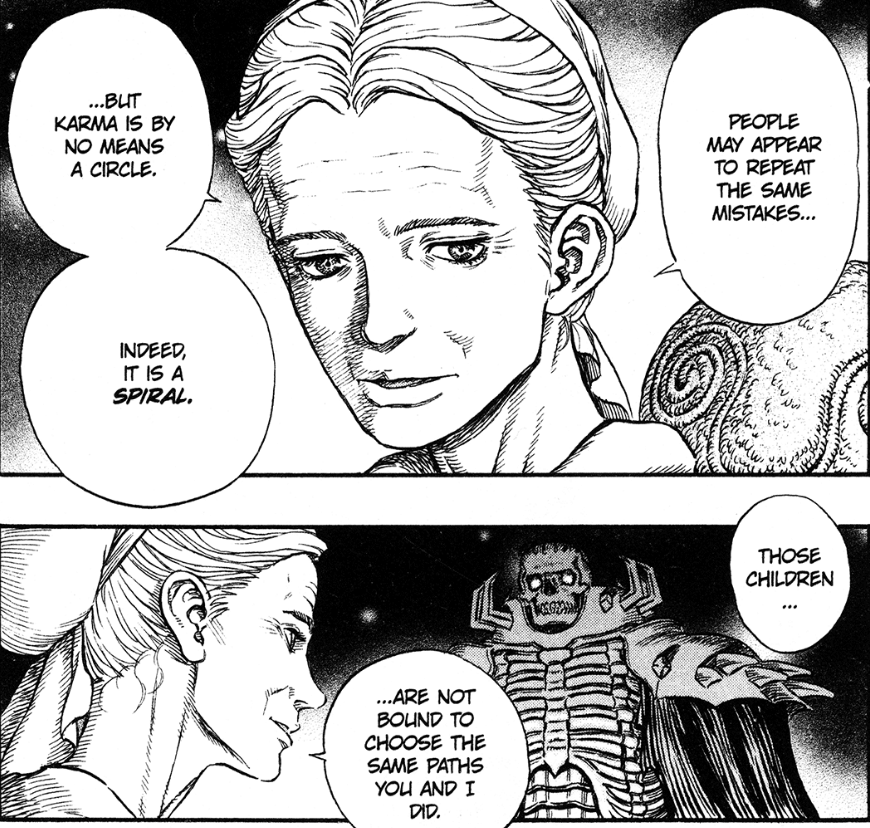 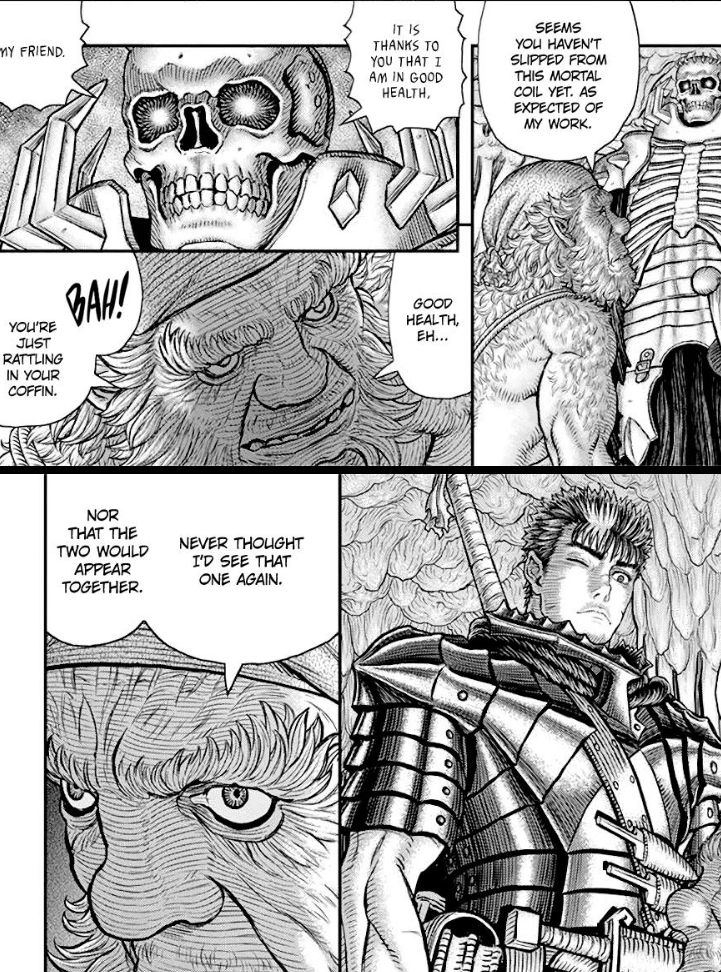 Eventually becoming known as... Skull Knight. This is a man who accomplished what Griffith's goal was.. so this leads us to the next part...

The religion of Holy See, that's created by the God Hand, portrayed Gaiseric as an evil king who needed to be punished. The Holy See then used the prophecy of "Falcon of Darkness" that already existed prior to the religion of Holy See, and manipulated it in such a way to make way for the "Falcon of Light", aka Griffith. Manipulating the history so Femto down the line could emerge into the world as a savior, this being an attempt to the override the prophecy of the Falcon of Darkness... which refers to Griffith.

It's insane how much the God Hand have fucked over Gaiseric, to a point the fuck over done to Guts by them is a playground thing.

Now we finally get to the comparison between the two. I'm going to break this down into multiple steps here:

1st. Gaiseric was renowned as King of Galloping Death due to his way of fighting. Then we have Guts who loved fighting and those who see him fight (even before the berserk armor) are often left in fear due to how ruthlessly he fights. 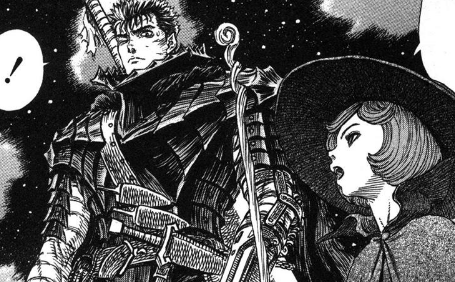 3rd. The "beautiful beloved" that were powerful women in their own right. Gaiseric had a beautiful woman he loved, and Guts has Casca who in this very recent arc has been commented on her beauty. 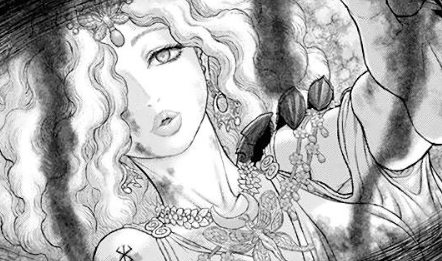 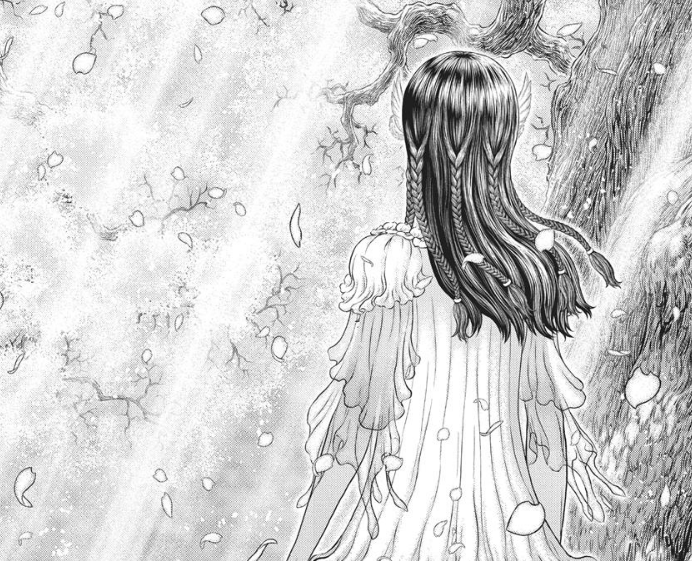 5th. Both have somebody who in the God Hand who fucked them over. (Void for Gaiseric, Femto for Guts)

7th. Gaiseric came on to the scene when the world was in chaos and brought an end to that chaos. Guts who was decently renowned as the raid commander of the Band of the Hawks, and then went MIA, will make his grand appearance for the world to witness to end the Age of Darkness.


For some reason people believe that Guts doesn't care about saving the world and such. While that maybe true, what we're witnessing from Guts however is character development. Guts had gone from not caring about anyone to caring about comrades, to again not caring about anyone except the few he knew, to now being more open and receptive of other people's help than ever before in his life. He is a natural born leader, this is not something that can be denied. Simply look at his raiders squad and how deep of an impression his leadership had on them. However, he simply never embraced that leadership aspect fully despite being full of it... and that would be the natural course of his development. Because I don't believe it's a mere coincidence that Miura was developing Guts into a figure who mirrored the 1 and only emperor in Berserk world's history, that brought peace in the most chaotic time the continent had known until the Age of Darkness.


So yea I believe Guts' destiny is to be the one who forms the 2nd empire in humanity's history continuing from where the God Hand fucked over Gaiseric, and even surpassing the kingdom that Gaiseric established. He will take down the Falcon of Darkness and lift the blindfold off of the "Blind white sheep" that follow him, becoming the king who will lead the white sheep (humanity) out of the age of darkness.
Last edited: Aug 9, 2022

‎
#2
I would love to see him being emperor after all this hard work.
About Gaiseric and Guts..I think History is repeating itself..
I Guess whoever fempto was before convert into Angel sacrificed Gaseric and his kingdom ...
X

‎
#3
Xlaw said:
I would love to see him being emperor after all this hard work.
About Gaiseric and Guts..I think History is repeating itself..
I Guess whoever fempto was before convert into Angel sacrificed Gaseric and his kingdom ...
Click to expand...
Yea hopefully we get a full in-detail flashback related to Gaiseric soon enough. Especially since from the looks of it Void is the only remaining God Hand remaining from the 5 that were there during that eclipse.