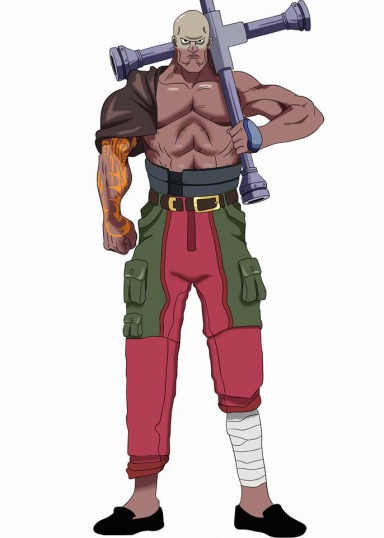 Affiliation: Pirate (currently not in any pirate crew)

determined, calm (but is quick to lose temper once his kinship and the city of Flevance or anything about Amber lead is talked about or mocked in front of him), skilled in crafting, decent knowledge in navigating and historical/archeological stuff
Personality:


Background Story:
Brief Description
-Brig is the second survivor from the "White City" Flevance, after the mass outbreak of the amber lead disease.


Childhood
-His story began 16 years ago from the 2 year timeskip, right after the mass outbreak of the amber lead disease at Flevance.
Brig is a 12 year old boy with his mother as a craftsman who specializes in making weapons made of amber lead. His father on the other hand died when he was still 9 after getting burried alive when the area where they are mining amber lead suddenly collapsed.
Eversince, Brig had helped his mother in their business while constantly dreaming of going out to venture at the sea. He had heard of rumors about a train capable of traveling to the sea being built at the place called Water 7. He badly wants to go there and see the train of his dreams.
One night, and a week before the outbreak, he and his mother had been indulged in a fight when Brig tried to ask permission to go out the sea. Much to his dismay, his mother rejected it, saying that dreams cannot fill one's stomach. Brig left their home out of anger, without knowing that his mother had always known about Brig's dream. And so she had to push Brig away, as his son will never leave himself if she told him to.
That night, Brig saw a small boat offshore and his things packed in it. From there, he knew that his mother had supported him from the time he first dreamt about traveling.

The amber lead disease outbreak happened. Everyone got infected. Then the World Government had to put a stop once and for all. Every citizen were wiped out.
Brig was on an island somewhere at North Blue. He also started to show symptoms of the disease. White pigments appeared in his head and all over his body. Soon the news about the killing of the people of Flevance began to spread in some parts of North Blue. And eventually it reached Brig.
Brig had to postpone his travels and tried to return to Flevance. Upon arriving, all that greeted him was emptiness. His once home, was now an abandoned island in white. Brig was now filled with sadness and hatred towards the World Government.
Flashbacks of his father's death started to come up. How the Royal Family of Flevance did the same hideous acts just like what World Government did to his fellow people.

Fired up with his revenge set in mind, Brig set out once more to look for a cure in his disease and some information about the World Government's insides.
Brig knows that his life span is limited to only 38 months so he needs to find a cure right away. Although the disease is not contagious, yet as expected, the false news about the amber lead disease spread out by the newspapers mixed with the fear in the people's minds made it hard for Brig to accomplish neither of his goals with ease.

During those times, Brig has associated himself along the black markets he comes across to. Then, he finally received a certain information about some lunatic who comes into every island with hospitals in it, in order to cure a boy who suffered from amber lead disease.

-"What? A boy with amber lead disease you say?"-

-"Yes. In fact they too, were looking for a certain cure for it."-

-"Listen to me you. I have spent the last span of my life, searching for a cure for amber lead disease ! So far I've found hoodlooms!"-


Minion Island
-Brig then went to Minion Island, where the pirates holding the said devil fruit are. But when he arrived, he saw Marine ships and so he quickly when into hiding.

And so it happened. Corazon died, and after that, Trafalgar Law wandered all alone. Trying to master his new power to finally cure him from his sickness.
It was bitter work. But finally, after almost 2-3 months, Law grasped the power and cured himself from the disease. He ventured out to avenge Corazon from Doflamingo.


Peepingshire Village
-Then, a month later, Law came across a barely alive and breathing Brig. He confronted Law for the devil fruit, until he passed out. Law immediately performed the surgery on Brig. Then Brig woke up for a bit, and asked Law to leave the marks on him.

Brig was surprised he was still alive. Law revealed to him that he had cured the disease. Law asked Brig as to why he wanted the marks to remain.

-"Sniff. I want to be reminded of how I almost died and lost everything even my life. And how this disease that almost took everything, made me push myself to continue."-

Law invited over Brig to join his crew, but he rejected it saying that eventhough Law's revenge and his are same, it leads them to separate direction. Brig gave his vivre card to Law, then the two bid farewell to each other.


Water 7
-Brig is now seen headed to his dream, to see the Puffing Tom. Brig spent his years there learning everything about being a shipwright as he could. While also, becoming an underground boss at Water 7 still continuing his information gathering abiut the World Government. He also witnessed how the greatest shipwright he idolizes, Tom, died.

He earned the title "White Face", for everytime he asks on someone, inspite him telling his name, the only thing people remembers about him, is his trademark bald head with white coloring in half of his face.

After almost 6 years at Water 7, Brig thought that all the revenge business ain't giving him some slack. Then he heard about some island in the sky. They say that no one has yet proven anything about it. He thought it'd be good to check it out and use that for his revenge against the World Government.


Mock Town
-Brig arrived at Mock Town, where the rumors about the Sky Island are loud. He then heard of a guy on a small island, saying he is looking for evidences about Sky Island.

Brig went to see the guy which is Montblanc Cricket. Cricket and Brig saw each other at first glance. They just stared at one another until . . . .

-"Looking for a crazy guy. Says he is looking for an island that many said doesn't exist."-

The two fought and did an arm wrestling . . .

Cricket told Noland about his story and Brig did too. After that, Cricket just told some information on how to get to Sky Island somehow.
Then, one day, Brig tried it out and when Cricket was up, Brig was already gone.


In-Ligh-Ten
-Brig then finds himself surrounded by white and soft stuff. To his shock, he was standing on a clouds. Brig immediately thought that this was the Sky Island he was searching for.

Then someone came to him and greeted him. It was a bald guy with white color on half of his face. Brig was shocked as it looks like him. He thought it was another survivor from Flevance.

Turns out, it was a man wearing a sort of white mask. He then led Brig with him thinking that Brig was one of them, but a lot bigger.

Brig happened to have landed on one of the sky islands called "In-Ligh-Ten". It was named like that because it was believed to be the tenth sky island among all there is. Also, it is made up of 10 layers of 10 different color of clouds. It was inhabited by a group of monk-like sky people who believes in peace too much that they wear a smile in their face no matter what expression they make.

Brig asked why do they look a lot like him. They explained to Brig that in order to live they make ceramics made from hardened clouds. They use a large eisen dial to create those ceramics. And they also wear costumes in the form of a half white mask that looks like Brig to add humor in their work.
They said that, news about a white faced man was popular at that time so they adopted it.

Brig was intrigued with the dial system used at sky island and so he did everything to learn about it. There he built a weapon of his own. He designed it as a wrench-like dial with a main pipe system that has 4 mouths.

After 4 years of staying at the sky island In-Ligh-Ten, Brig bud farewell to the monks who had thought him about self-peace and inner strength.

As a farewell gift, the monk-like sky people, gave Brig a tattoo ressembling an elephant's trunk. For them, Brig's swing packs a punch much like that of a wild and ferocious elephant's trunk swing or even stronger.

After leaving the sky island, a loud bell ring was heard and a giant shadow can be seen below Jaya. It was the time Monkey D. Luffy defeated Enel.

Brig finally landed. Cricket was then relieved to know that such sky island does exist and that his friend Brig accomplished its own goal too.

After the 2 year timeskip, Rifleson "White Face" Brig was already 28 years of age.