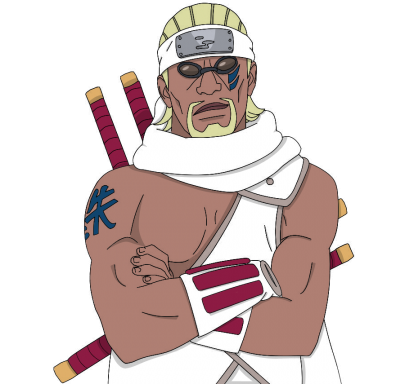 .
#1
Someone in a YouTube comment section once pointed out that Luffy, Kid and Law are similar to Luffy, Ace and Sabo in that there's Luffy then a brash and reckless member of the trio like Luffy (Kid and Ace) and a more level-headed, intelligent member (Law and Sabo). I then pointed out to this person that it's also interesting that in both cases the more reckless person among the trio also possesses Conqueror's Haki like Luffy does (Kid and Ace) and they found that interesting too but this really clicked even further for me when I realized that Oda really likes throwing Luffy into trios including the most obvious and old trio in terms of the story: 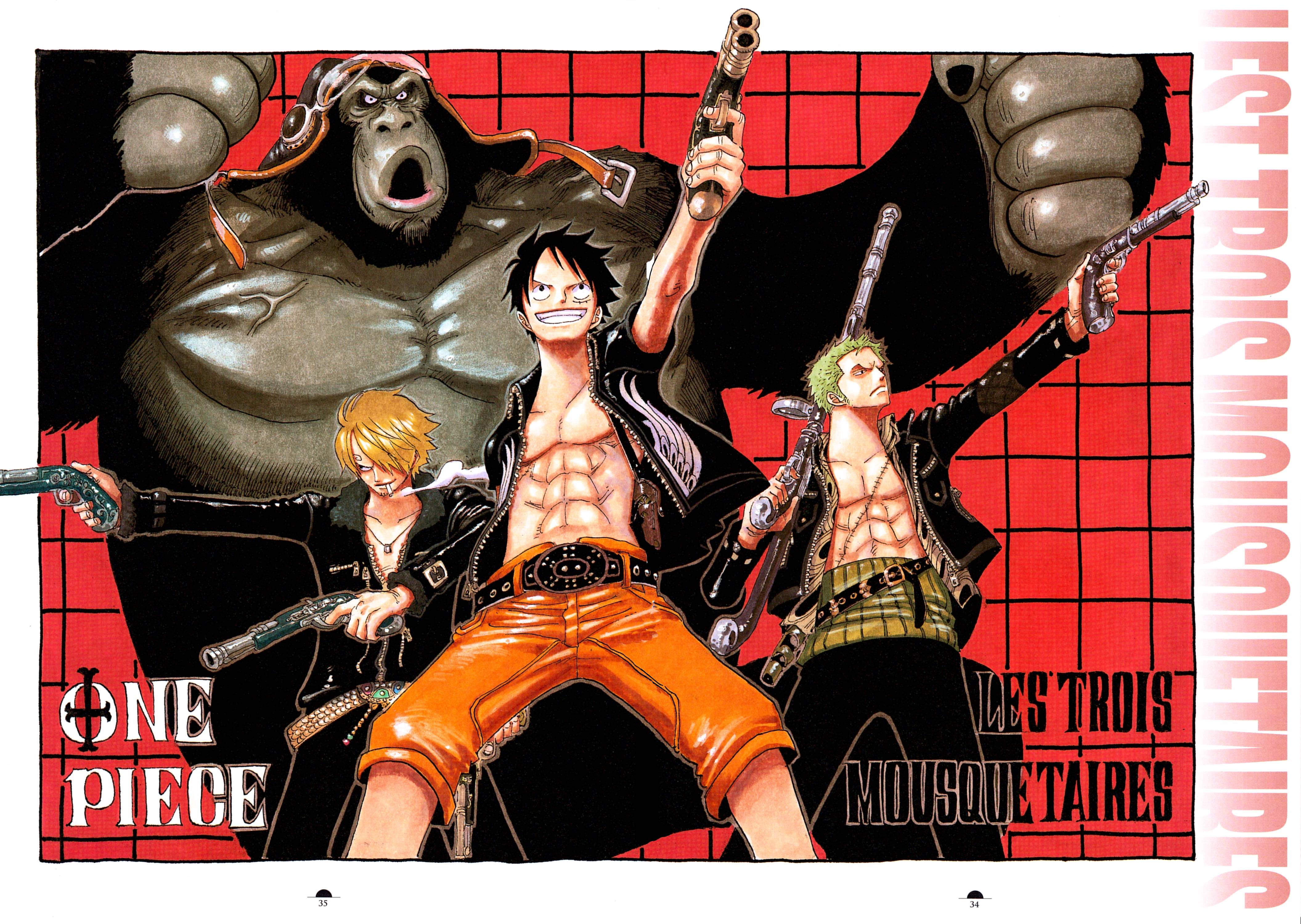 And here, once again, we see the same sort of pattern. One of the other two members of the trio is rather brash, in the limelight and reckless like Luffy (Zoro) and also has now been shown to have Conqueror's Haki like Luffy does whilst the other is more lowkey and level-headed (Sanji) but doesn't seem to have Conqueror's Haki like Sabo and Law don't seem to. In fact, it's very interesting that during the current Wano Arc Oda makes Zoro and Kid as well as Sanji and Law behave quite similarly during the initial stages of the raid. Zoro and Kid are out there with Luffy making noise and being reckless to a point where Killer lumps the three of them together whereas Sanji and Law are off in the shadows doing their thing with Sanji eventually saving Momo through his invisibility and Law maneuvering around Onigashima once he arrives on the island and checking out that Poneglyph in the basement. 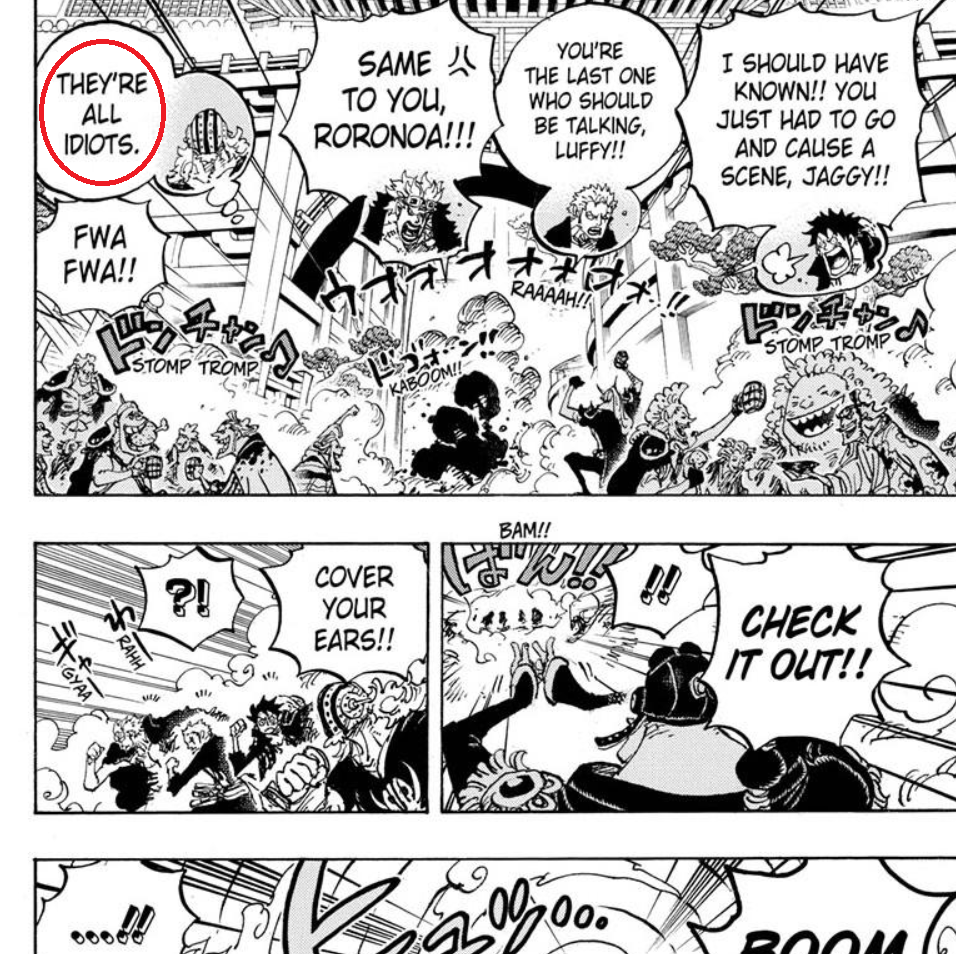 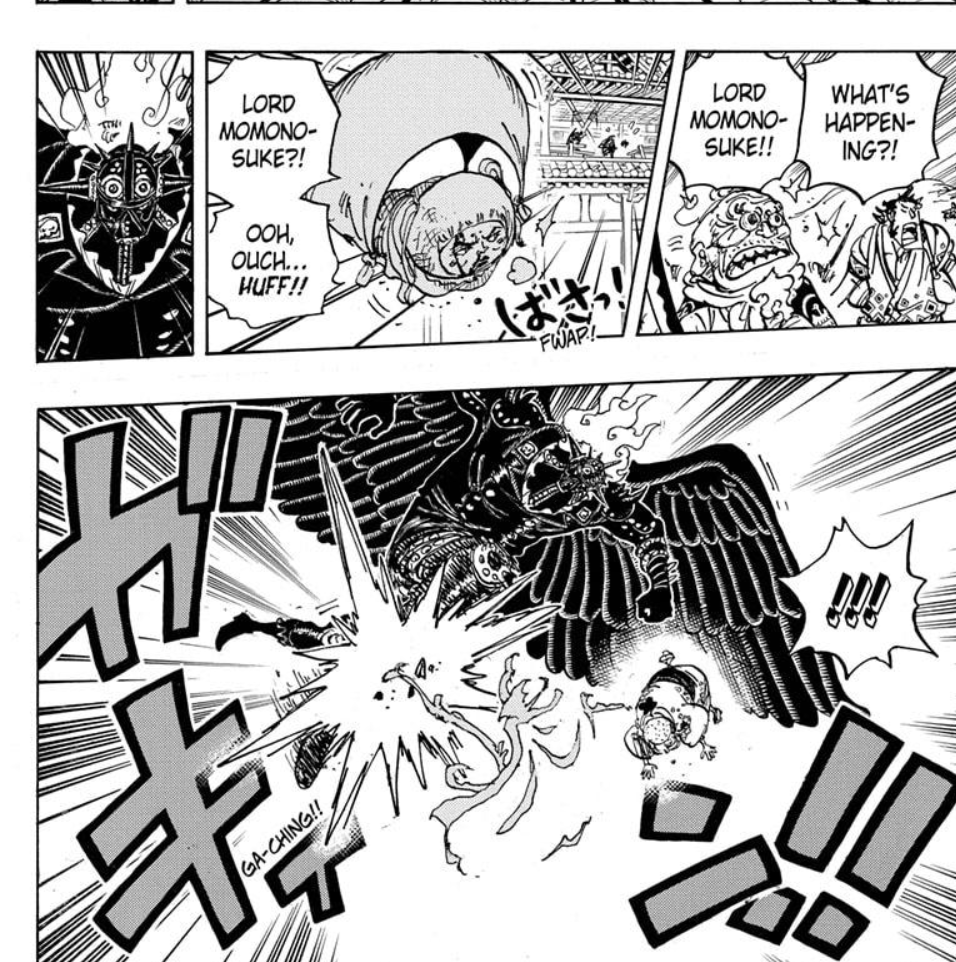 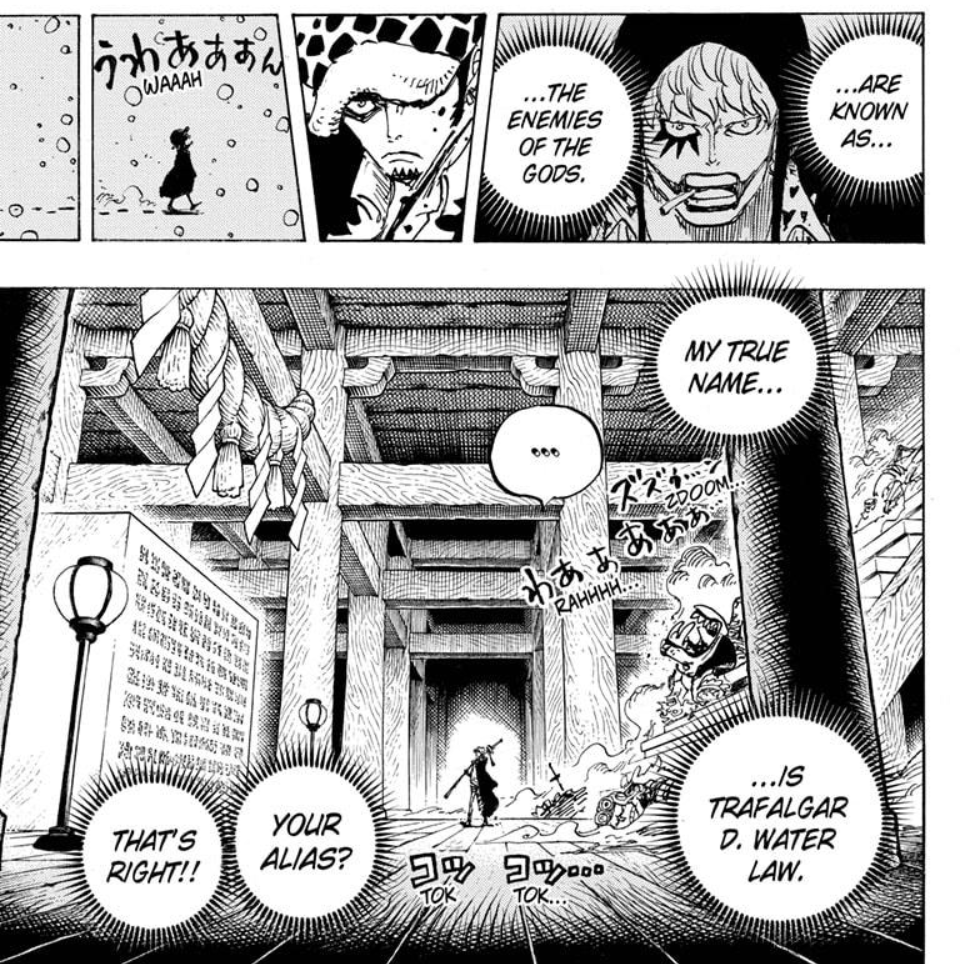 This is pretty eye-catching stuff and I've noticed that person I encountered isn't the only one who's caught the connection based on images like this and this being out there but what's even more intriguing to me is that I think several trios relating to or paralleling the Straw-Hats are somewhat similar in their dynamics. Trios like:


We don't know too much about the dynamics of the Roger Pirates but we can tell so far that Roger and Rayleigh were more in the limelight and famous than Gaban with both of them being confirmed CoC users whilst Gaban isn't confirmed or denied yet and I doubt he has it. With Whitebeard's crew I've already explained how I think it works that that group's "Monster Trio" are essentially Whitebeard, Oden and Marco even though the three, altogether, were never contemporaries in their primes. And in this case too you have Oden who's much more loud and larger than life compared to Marco being a CoC user like Whitebeard whereas Marco seems to lack the ability. Moving on, from reading the Vivre cards it looks like Tsuru was the sort of unofficial third admiral or legendary Marine of her era alongside Sengoku and Garp and once again we see that two characters are much more legendary and in the limelight with CoC and one who doesn't seem to have it. I know it's not confirmed that Garp has it unlike with Sengoku via the vivre cards but it's quite likely that he has it given that Luffy has it and it's also strongly implied that Dragon has it; plus, it would jibe a lot better with how he was competing so closely with the likes of Sengoku and Roger. 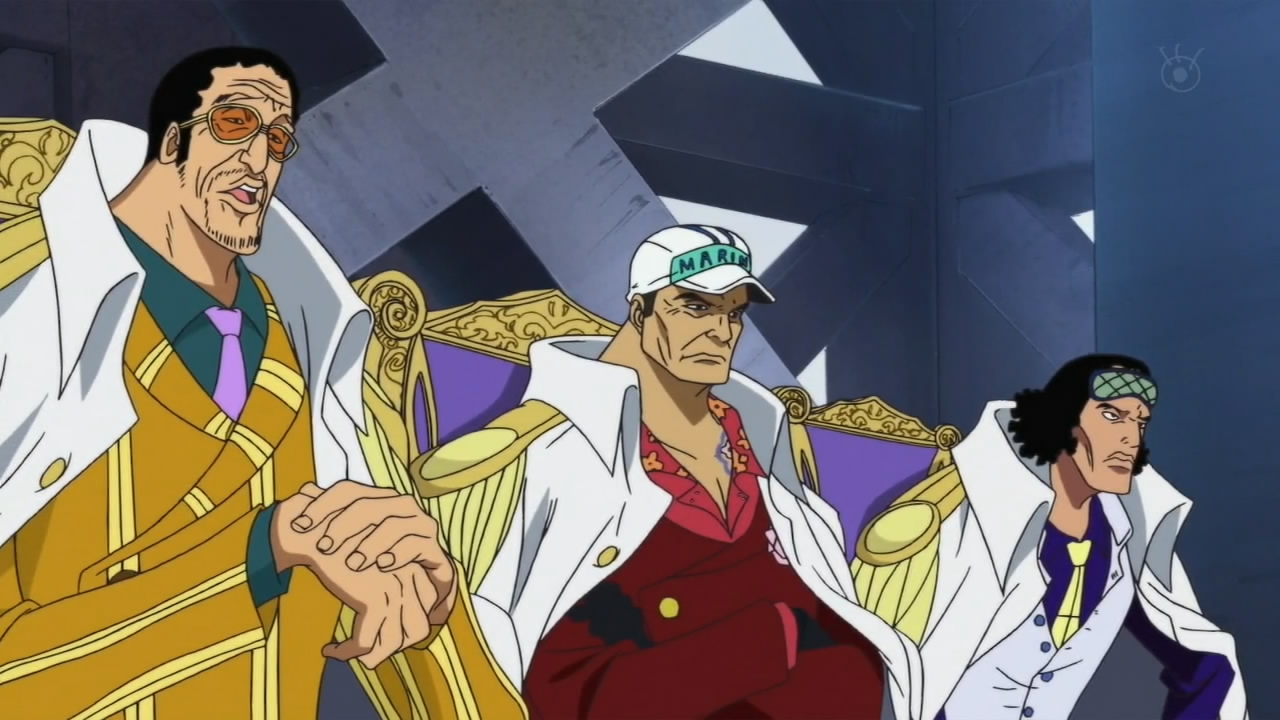 The original three Admirals are an interesting case as well. I think a lot of us might have had it in our heads early on back during Part I that they were somehow being setup for the Monster Trio someday. Kizaru is a kick-based fighter like Sanji who interestingly got pitted against Marco during the Summit War, Akainu killed Ace and gave Luffy his scar whilst now being the head of the Marines as a sort of parallel to the Pirate King and hmm... I guess Aokiji was always kind of muddy though it's worth nothing that he lazies and sleeps around a lot like Zoro and, well, we can't ignore that Aokiji vied for the top spot against Akainu whereas Kizaru didn't and Kizaru seems to be implied to be the weakest or at least the least suitable for leadership among the three. So I have a feeling Akainu and Aokiji possibly do have CoC whilst Kizaru does not or the trio are at least being thematically setup to resemble the other similar trios.

There are also several other slight parallels that might be worth mentioning among the trios like both Sanji and Sabo being born of nobility and blonde and what I mentioned about Zoro and Aokiji's penchant for sleep or Sanji, Kizaru and Macro's kick-based fighting styles or Zoro, Ace and Kid's recklessness and so on and so forth. I think Oda generally has this fixation with the trio theme. There's always a top-dog with Coc joined by a close second who also seems to have CoC and then a third who doesn't have CoC with the exact gap between the 3rd and 2nd being a little ambiguous overall like Morj notes here with the Monster Trio. I think this also generally confirms Sanji probably won't ever get CoC but based on the people he's seemingly being paralleled with he definitely is going to be incredibly powerful and infamous by the end of the story though overshadowed by The Pirate King and The World's Strongest Swordsman.

Hope this was an enjoyable read!


Side note: I switched up the rankings of Garp and Sengoku in the earlier text and the collages because I feel, personally, like who is really the big dog among them is a little ambiguous. In terms of rank it is definitely Sengoku but Garp also avoided the Admiralship and never had any chance to vie for the Fleet Admiral seat as a result and, to me at least, it's somewhat implied that he's probably stronger than Sengoku so it's a little ambiguous as to who deserves to be up there as the top dog.
You must log in or register to reply here.
Share: Facebook Twitter Google+ Reddit Pinterest Tumblr WhatsApp Email Link
Top