DISCLAIMER: Worstgen does not create or take part in the creation of these spoilers. The spoilers are found on sources on the internet (open information), and are posted here for discussion.
Click to expand...

‎
#2
Spoilers, thanks to redon from Arlong Park Forums.

- Chapter 1,042: “"Winners" need no excuse”.
- In the cover, Oven is carrying Vinsmoke's book to Whole Cake Island.
- X Drake Vs. CP0 boss. Drake stabs CP0 boss, that turns and hits Drake's throat with “Shigan”.
- The rest is Luffy Vs. Kaidou. We can see 3 new Kaidou's “Drunk modes”.
- Luffy changes to “Boundman” form and uses a new attack called “Gomu Gomu no Over Kong Gun”. Kaidou uses a new attack too called “Hourai Hakke”.
- At the end of the chapter, CP0 boss appears and Luffy got distracted. Kaidou brutally hits Luffy.
- Kaidou is completely shocked, his expression is heartbreaking when he sees that the same thing that happened with Oden has happened again.
Last edited: Mar 1, 2022

- No Break Next Week.

‎
#5
Kaidou's new 3 modes: 1- spoiled mode(like a spoiled brat i guess) 2- idk(but from what i found it's a person who likes alcohol and sweets equally, it could be thief mode too but i doubt it since it makes no sense) and 3- Slaughter mode

Luffy was going to lose the gear 4th so he used a second over kong gun, Kaidou says hourai and goes to attack him but the cp0 intervenes using tekkai(we don't know if cp0 used tekkai as an attack against luffy or used it to defend against Luffy's attack, someone asked the leaker in 5ch so maybe we will get the answer soon).
Kaidou remembers the moment when Oden got distracted and Luffy completely eats Kaidou's attack

I skipped what the leaker is talking about after he says the first 2 modes because without context i don't understand what is he talking about. He even said that about the tekkai but didn't say how is it used against Luffy there are a few descriptions pretty vague.

Oh and the title is Kaidou's line this chapter ‎
#7
Q: Kaidou knowing that Luffy was distracted by the CP0 attacked? I want to know the details from the flashback to the attack to Luffy.

A: He started running and couldn't stop himself.

Q: Not a shigan but a tekkai?
A: Just as it's written

Leaker: The CP0 used tekkai from behind, it's not like he was hit by Luffy's attack.

Me: Yes, you could have said that from the very beginning
Last edited: Mar 2, 2022

‎
#9
Q: When does Kaidou says the title?

A: At the middle of a page(yes, he says page but he doesn't say what page, maybe he wanted to say chapter and said page instead? idk)
Kaidou tells Luffy that Wano Kuni's people are used to lose. Luffy tells him to shut up and that they are strong. Kaidou wonders if they are strong or just pretending to be strong and then says the title asking him which one is he.

BTW the title is not "winners need no excuse" but it has a different translation but the meaning is a pain in the ass to explain since it use something that is used in japanese poems from what i just researched, the title would "literally" be "I can't put pillow words to 'winner'", but this pillow words thing is... To be honest just to make it more simple i think the title of "winners need no excuse" is completely fine so if anyone is confused, just don't mind and call it as that.

A: From panels we don't see Luffy's face, just him saying "Kugh"

A: He was stabbed in the beginning by Drake so...

Q: ん？割り込んで来るくらいには元気なんでしょ？(Referring to the last answer)

‎
#11
Q: According to Spoilers , Drake was stabbed in the throat by CP0 with a finger gun (Shingan), but what happened after that?
Was there any depiction of him falling down?

A: Just a picture of him almost falling backwards.

‎
#12
Full summary, thanks to redon from Arlong Park Forums.

Germa 66's Ahh… Emotionless Excursion, Vol. 6: “Niji and Yonji to Whole Cake Island”. In the cover, Oven is carrying the Vinsmoke's book on his shoulders. He's going to leave Cocoa Island towards Whole Cake Island through a mirror (Brûlée is next to it). As he leaves, Oven looks confused at Pudding (who is still in Chocolate Town).

Chapter starts on the 1st floor of Onigashima castle's basement. X Drake (in hybrid form) has stabed CP0 boss from the back with his sword. CP0 boss spits blood out of his mouth.

Cut to the “Flower Capital”, people are finishing the preparations for the sky boats. Toko already has ready her ship.

Cut to Onigashima castle's roof. Luffy keeps hitting Kaidou with high-speed punches. Kaidou manages to stop one of them with his kanabo, but immediately after that he receives 3 more punches without being able to stop them.

Kaidou: "The trajectory of this attack is curved...!?
It hurts...!!!
Considering the nature of gum, this kind of move should be impossible...!!"

Despite Luffy's attacks, Kaidou looks at him confidently.

Kaidou enters in “Amae Jougo” mode (Craving Love Drunk mode). As Luffy punches him in the face, Kaidou winks at him and touches his lip making a “sexy face”. Luffy gets very angry.

Suddenly, Kaidou moves at high speed and manages to escape from Luffy's punches.

We see Kaidou has changed to dragon form and he's moving his body just like Luffy moves his arms when he uses Gear 4 (he can change his direction at will and very quickly). Kaidou enters in “Nusubito Jougo” mode (Stealing Drunk mode). Then he bites Luffy very hard.

Kaidou puts Luffy into his mouth and flies up, away from Onigashima.

Luffy punches Kaidou inside of his mouth to try Kaidou releases him.

After flying up a bit, Kaidou stops and looks down at Onigashima. He then opens his mouth and shoots a “Bolo Breath” point-blank to Luffy, who can't dodge it. The attack hits Onigashima and pierces through the entire island and the castle. We see how “Bolo Breath” goes through the Live Floor and goes between Yamato and Momonosuke at the bottom of the island.

“Bolo Breath” swept along Luffy through the entire Onigashima but he finally escapes from it when Kaidou's beam pierces all the island. Luffy changes into “Boundman” form and flies back where Kaidou is.

Kaidou tries to bite Luffy again, but he dodges him and flies over Kaidou.

Kaidou: "Wi~~~ Your condition is more severe than expected."

Luffy talks to Kaidou as he prepares the next attack.

Kaidou: "Wororo!!
I don't care whose side you are on...!!
People of “Wanokuni” are comfortable with losing.
This country is full of “peace-loving weaklings”!! And “honorable deaths”!!
But all of them are just “losers” trying to find excuses for their failure!!!"

Kaidou: "Strong!? Or just pretending to be strong!? “Winners” need no excuse!!
Which one are you!!?"

While they talk, Kaidou prepares another “Bolo Breath”, but Luffy attacks first.

Luffy hits Kaidou's jaw with a powerful punch. Kaidou's “Bolo Breath” explodes in his own mouth. After the attack Kaidou falls to the ground, Luffy runs towards Kaidou to attack him again.

Suddenly, while Luffy prepares his next attack, Kaidou (in hybrid form) attacks him at full speed. Luffy is surprised.

Kaidou blows Luffy with an upgraded version of “Raimei Hakke”. Luffy falls to the ground with his eyes blank and begins to expel steam from his mouth. However, Luffy covers his mouth preventing “Gear Fourth” is disabled.

Kaidou looks at Luffy, his eyes are spiral shaped. Kaidou enters in “Satsuriku Jougo” mode (Killing Spree Drunk mode). Luffy gets up and prepares to attack again, Kaidou also prepares to face him.

Suddenly, we see that CP0 boss is running to the area where they are fighting. CP0 boss jumps and grabs the shoulder of Luffy's arm with which he is about to attack Kaidou.

Kaidou is shocked and upset for CP0 boss' appearance, but he can't stop. In that moment, Kaidou remembers when he hit Oden 20 years ago (these memories are from Kaidou's point of view). Oden and Luffy faces are practically the same.

In an AMAZING final double page (for me, one of the best in all One Piece) Kaidou brutally hits Luffy with his kanabo using Color of the Supreme King Haki. “Hourai Hakke” hits Luffy's body directly (Kaidou's kanabo hits Luffy's body like a mallet). Luffy can't defend himself thanks to CP0 boss distraction. CP0 boss manages to move away just in time, so the blow did not hit him.

Kaidou's expression after hitting Luffy is heartbreaking, he is completely shocked. Luffy is badly injured and bleeding a lot. Chapter ends with this sentence from series' editor.

End of the chapter. 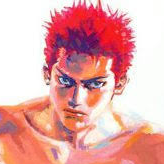 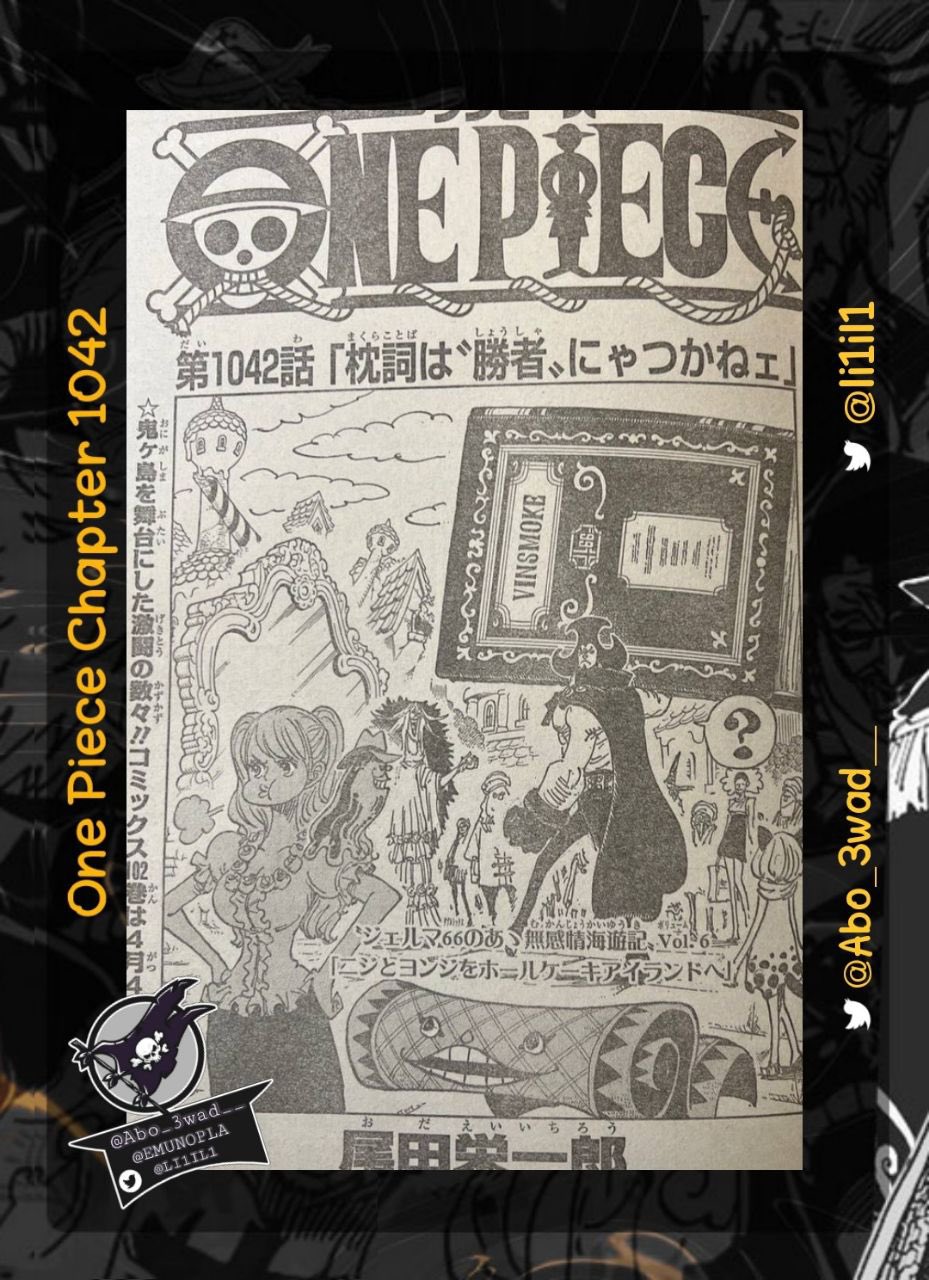 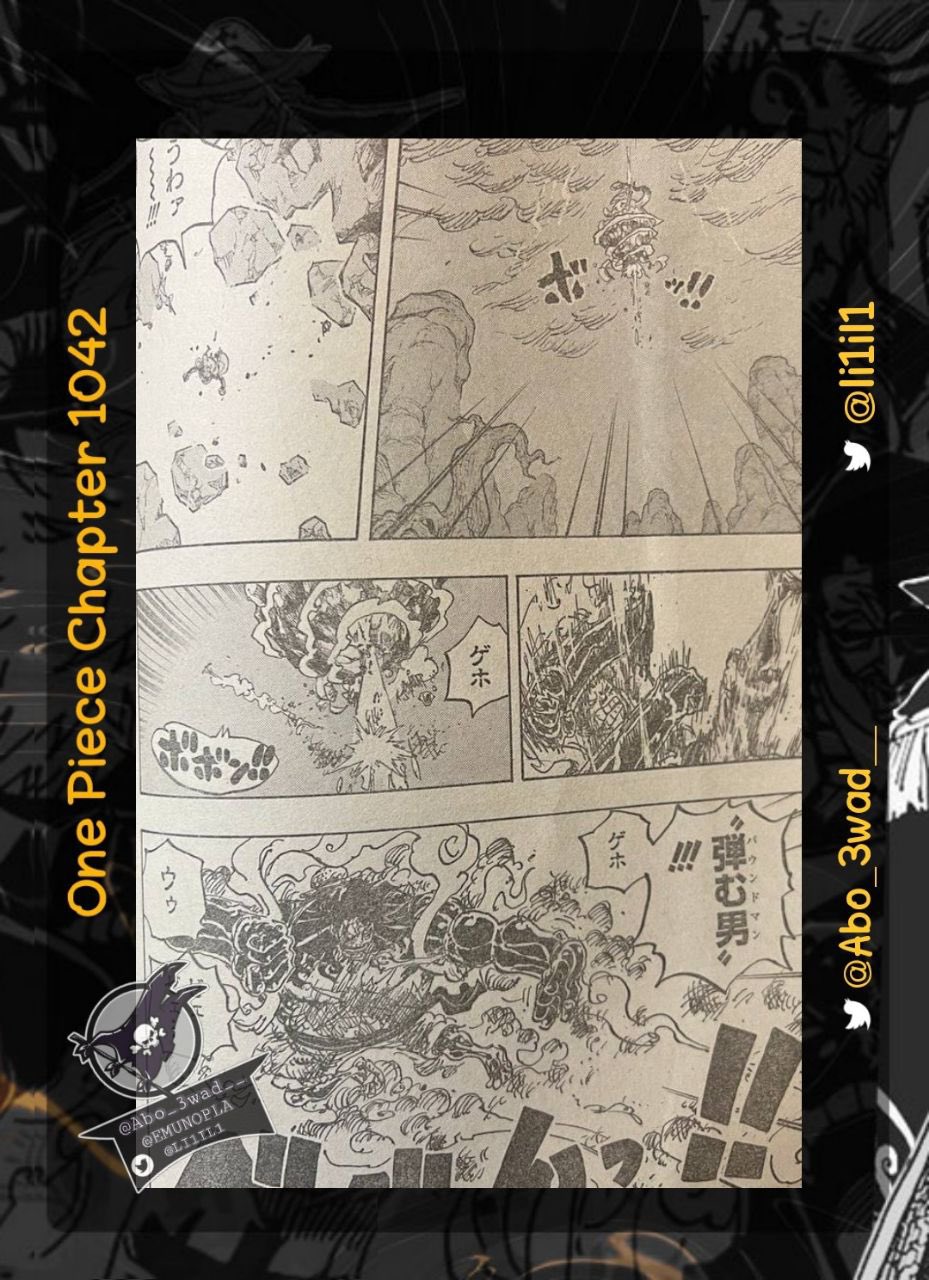 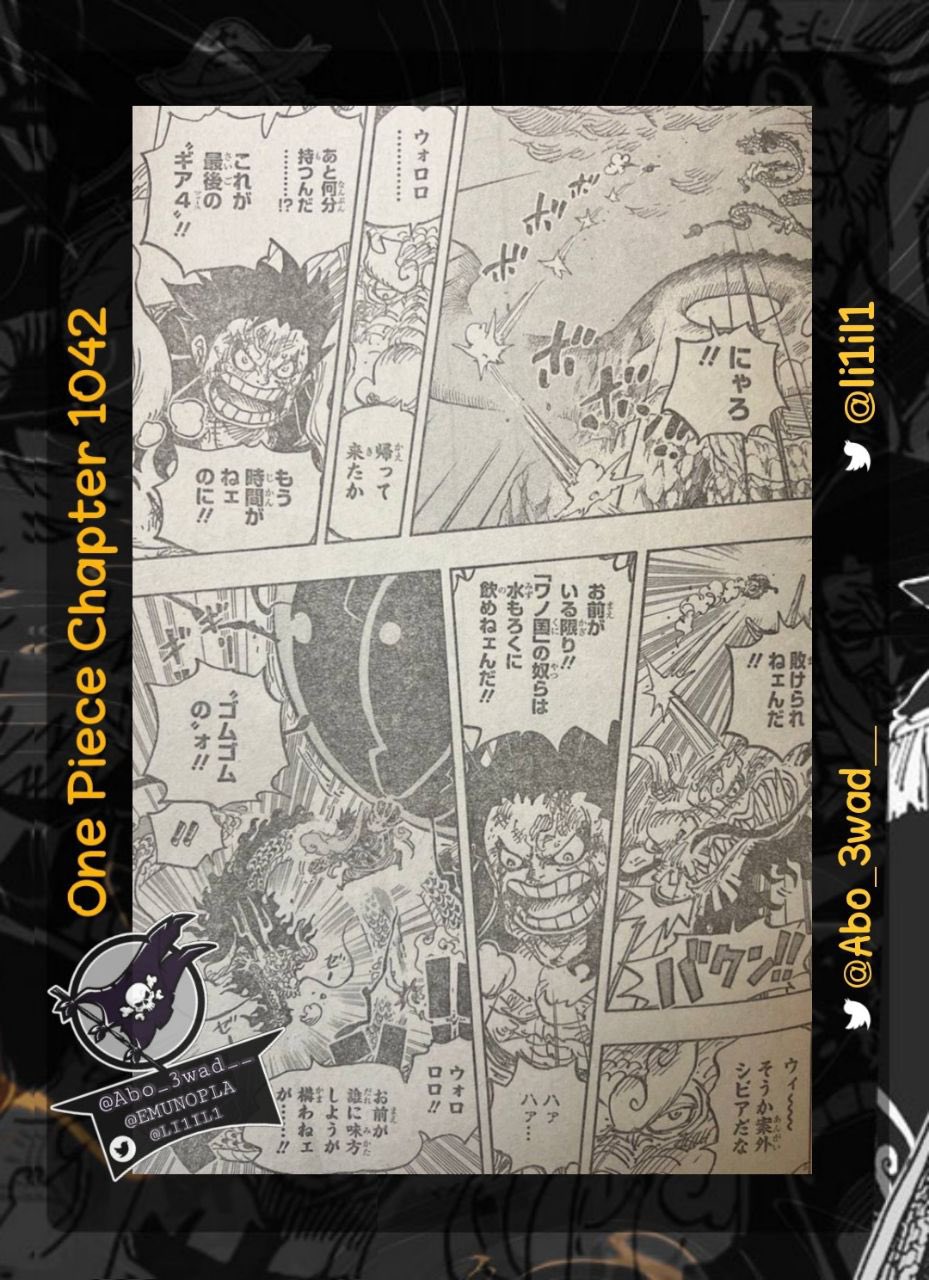 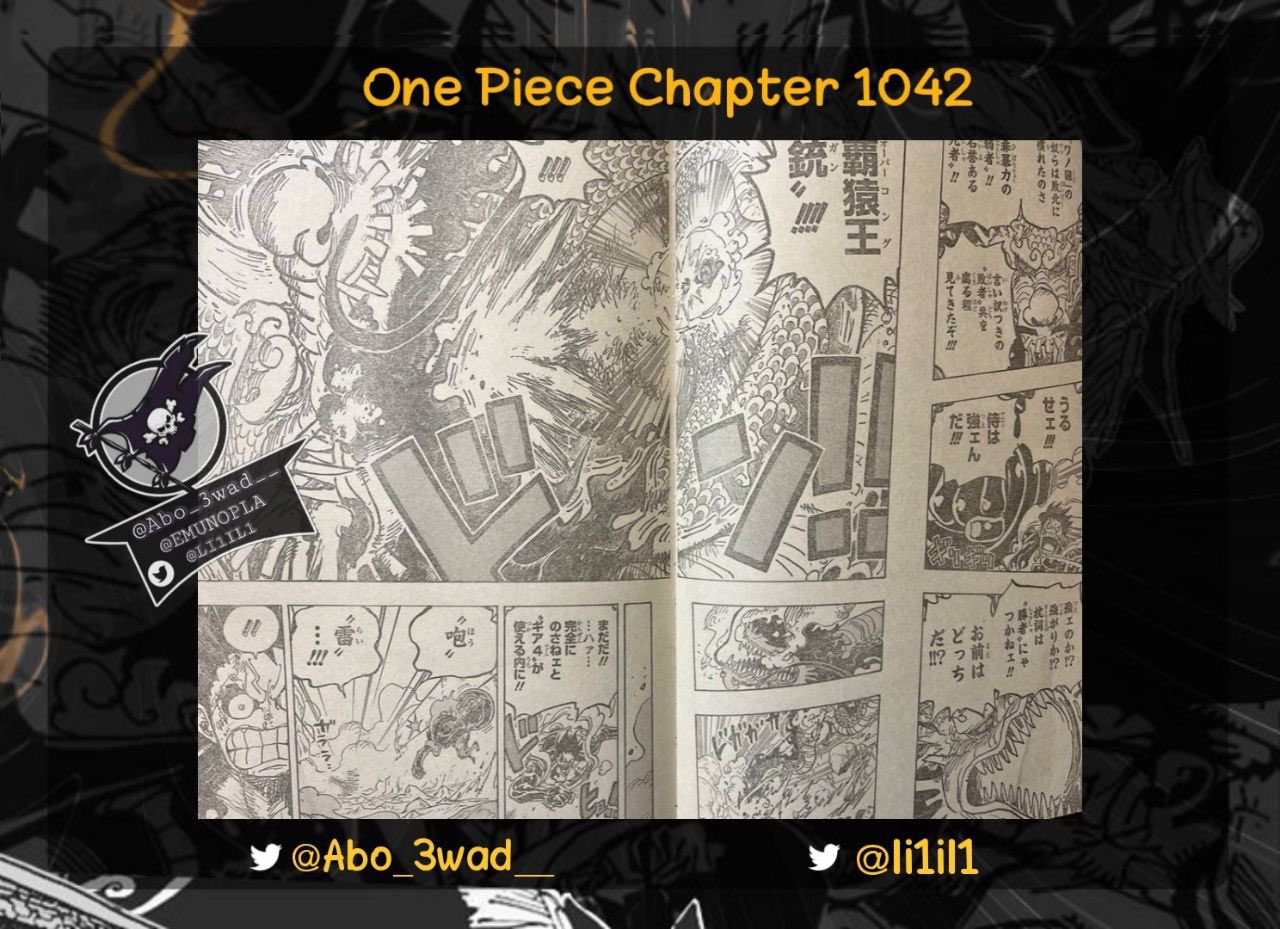 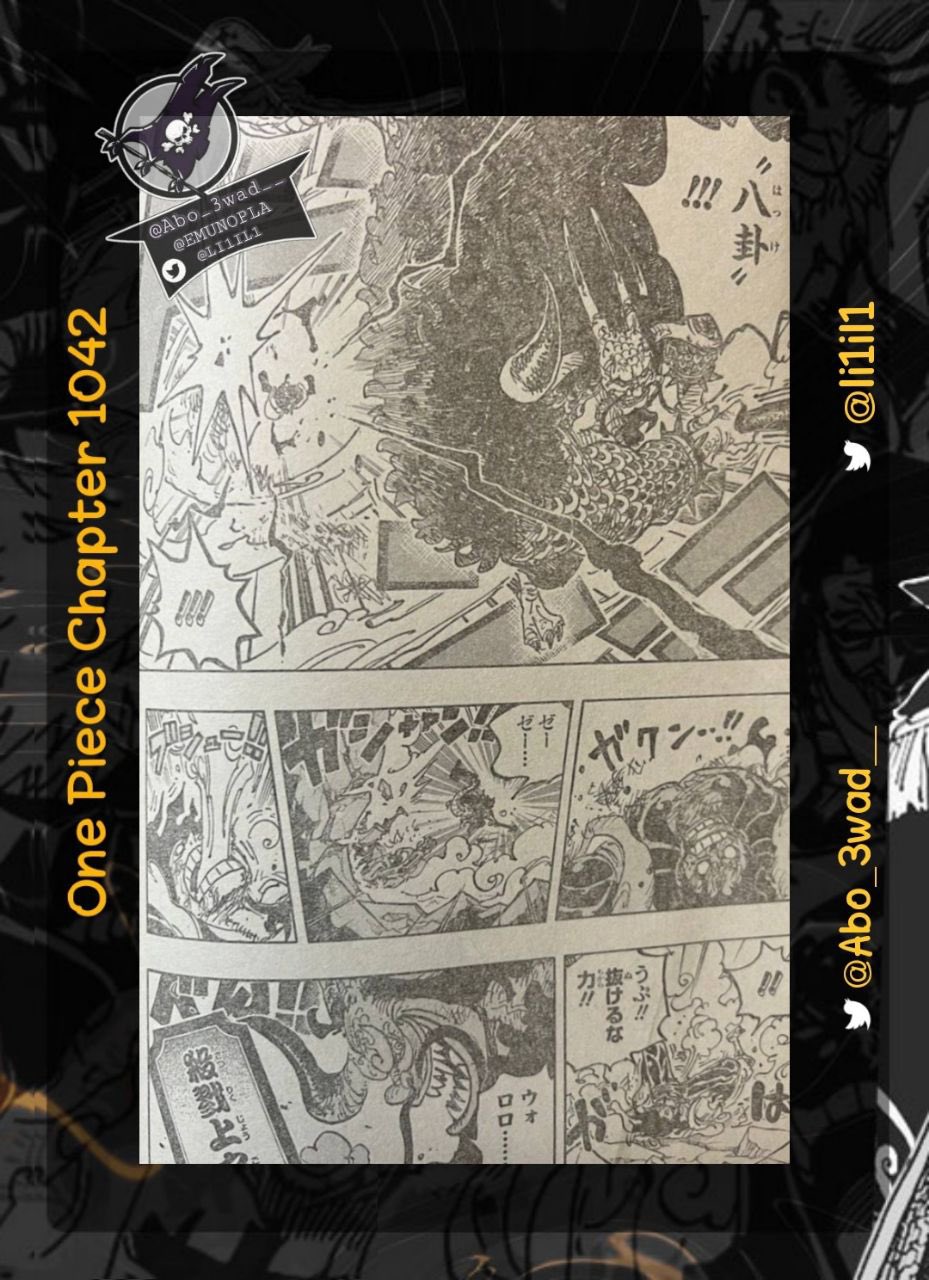 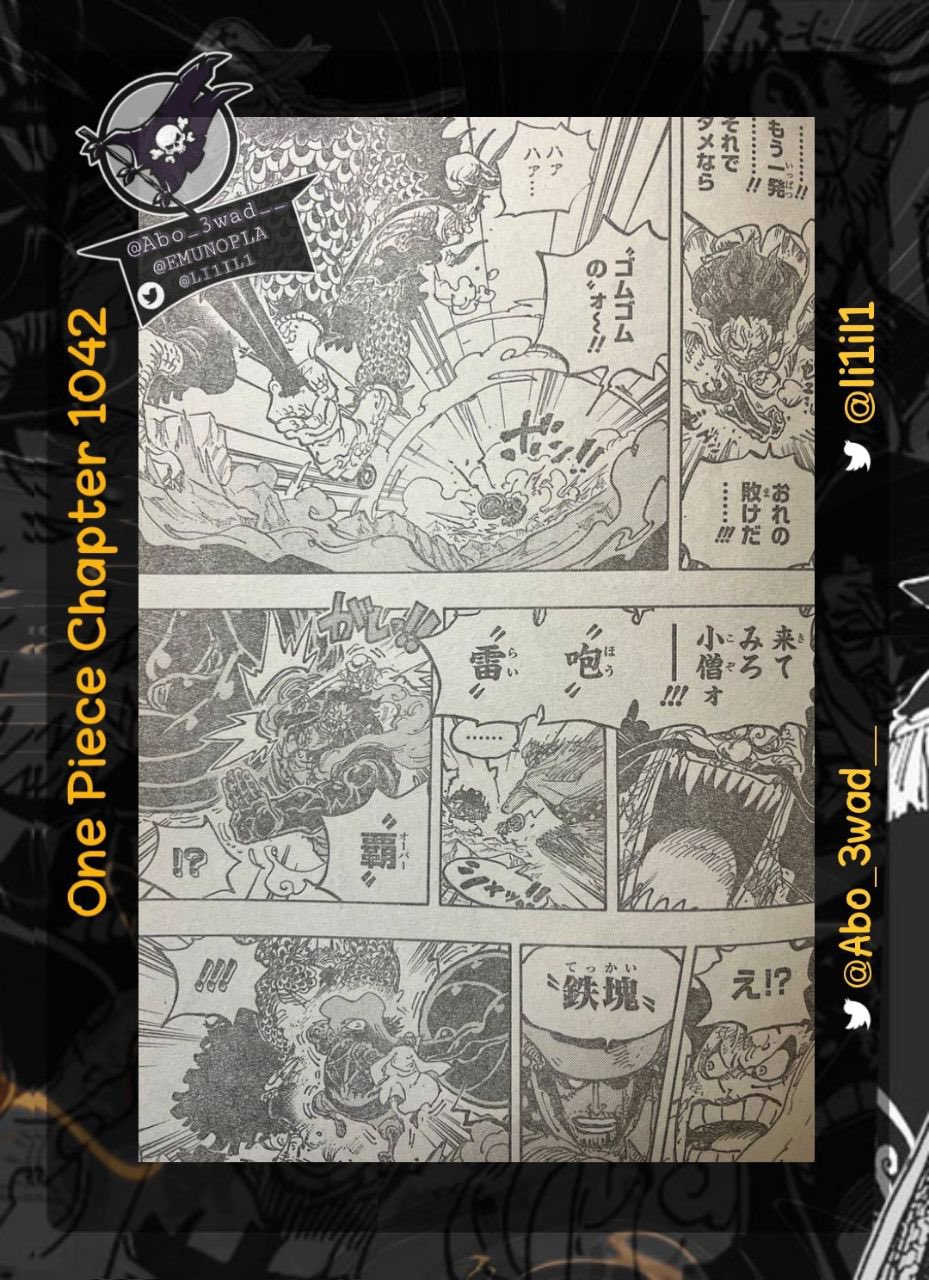 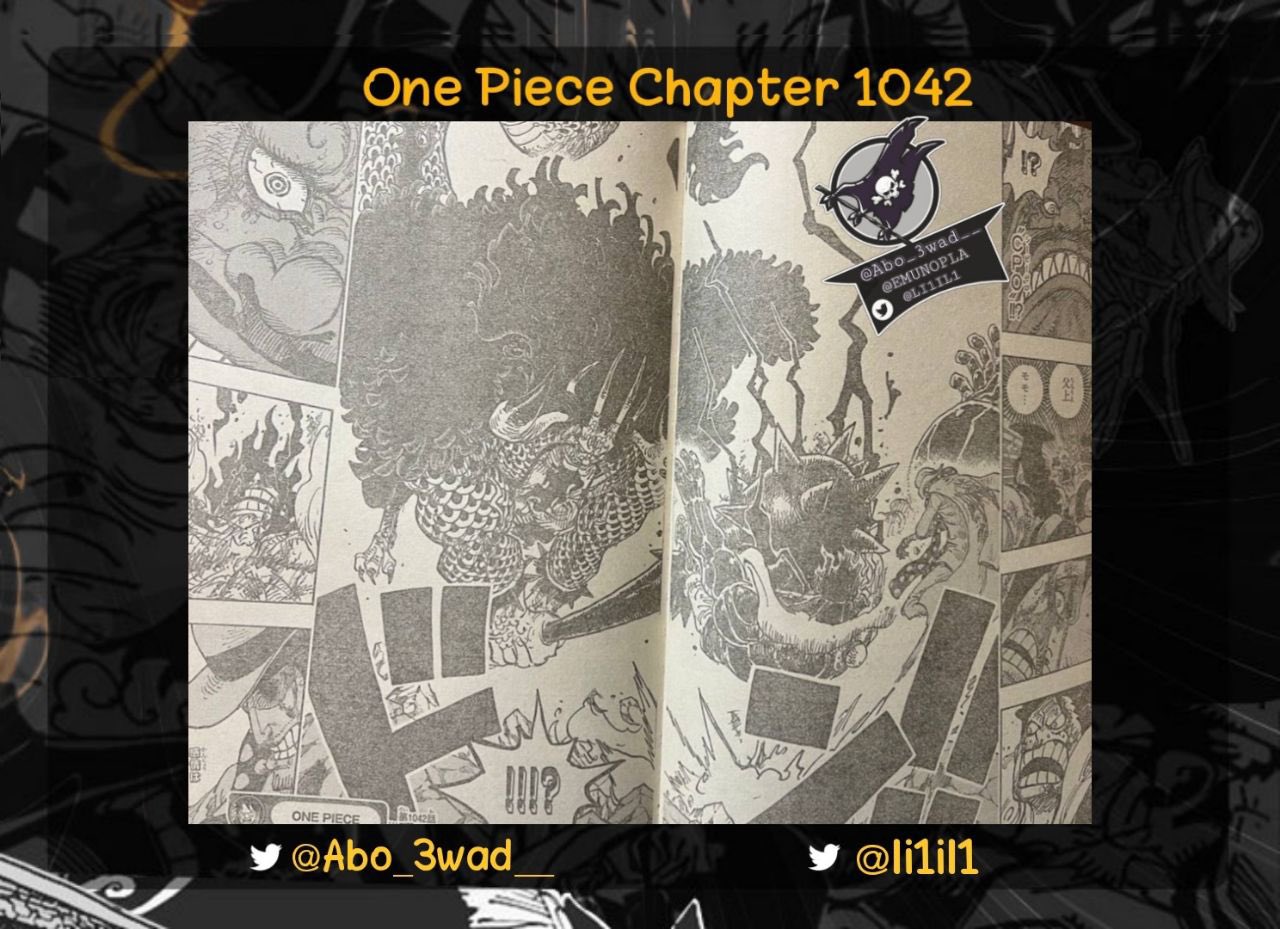