.
#1
With so many VS threads or talks about strategies/wars/etc, lets get into the politics of the manga now shall we. This thread will involve the usage of historical spoilers without any usage of spoiler marks. So if you don't want to be spoiled, do not read... but if you don't give a fuck or have already read the historical spoilers.. continue on.


In the manga of KINGDOM since the early chapters there has been a primary goal that has been worked on by the MC's crew, the unification of China. This unification of China was first brought up by Ei Sei in his meeting with Yotanwa, where he brings it up to get the alliance of the mountain people to help him take the throne back. Ei Sei's reason for unifying China is centered around bringing peace to the lands of China. Now over the course of the manga we have been introduced to other ideologies as well that counter Ei Sei's, unification plans for bringing peace to China. Specifically there are two, both of these brought up by the two big antagonists of the series, Riboku & Ryofui. But which is the better one or the one Hara backs up? Well let's do a proper break down here of these 3 individuals and their methods and see what we come up with.

This method to bring peace is brought up by an individual who had suffered greatly at the hands of the citizens of Zhao that were taking their hate of the Qin out on him. So at an early age he had faced extreme suffering to a point he had stopped smiling and everything until he met that the merchant that brought his humanity back. Then overtime he sees this warfare that has created immense disdain in the hearts of people of various nations towards the others, leading to this cycle of hate that keeps the 500 years of warfare going on and on. His answer to end all of it is to unify China through martial might, knowing that this requires tremendous tragedy that will lead to the slaughtering of millions in order for it to happen. He however believes that because he is the king born in the warring states era it is fine, he's willing to burden himself with the mass slaughter if it means that wars across China will indefinitely end and that the generation after him will no longer suffer through the darkness brought on by warfare.

Ei Sei's reasoning to do it: He is a King born in the era of warfare, thus it's his destiny to commit warfare, he will use that warfare to completely eradicate warfare from China.


Method #2 - Using the money & prosperity to end the warfare:-

This method is brought up by an individual who worked his way up the ladder as a normal merchant since he was a child to having the likes of Ri Shi, Shouheikun, and etc under him. A man who saw battles from the sidelines, seeing how men fought each other with the weapons given to them by him and his ilk. From seeing that Ryofui believed warfare was tremendously stupid. Those who do the actual fighting are only helping the ones at top will their pockets with the benefits. So his plan was to transform Qin into the most prosperous state in China's history within 10 years of taking the throne. Using that prosperity he will leverage with the other states into forming treaties of peace and eventually transform the Qin into the center of all-China economy. Thus he would end the warring states era.


Ryofui's reasoning to do it: Money runs everything, money led to greed which led to warfare, thus using money one can control a person's greed and by controlling the greed one can end warfare. A leader's responsibility is to make their people prosper.

This method is brought up by an individual who spent years on the battlefield, then eventually lost everything family/friends/etc to warfare. Then after that years fighting and climbing to the high rank of a Great General + Prime Minister, all while dealing with an incompetent King. His method is quite simple, a powerful King like Ei Sei calls for a meeting between all of the Kings of the realm. In that meeting treaty of peace is conducted by all of the states. If one state then tries to break the treaty, others will mobilize to eliminate that state, due to that threat no state would want to go to war with each other.

Riboku's reasoning to do it: Alliances worked in preventing warfare between nations, this would now be on a grander scale with a similar concept. With the threat of one state being obliterated by the others no one would step out of line, rather than slaughtering millions.

So we have three methods that Hara has introduced so far from 3 different people with extremely different backgrounds.

Person #1: Had an extremely rough early childhood, then pushed into spot of a monarch, while still having to overcome obstacles.

Person #2: Started from a normal merchant family, then worked his way up to 2nd only to the King himself in the Nation in his later adult years.

Person #3: Started from normal fam, fought in battles since he was a kid, lost his friends & family, then worked his way up to being a prime minister + great general within 10 or so years.

Flaw: All 3 of the ideas essentially have the same flaw when it comes to long term, the people after them will fuck it up. Ei Sei thinks it won't happen due to light/will reasons, Ryofui knows it will happen and Riboku knows it will happen. However, Ryofui & Riboku prefer it over the mass slaughter that is the unification of China, which they see ending up in failure. So Hara is not saying Ei Sei is doing the right thing, that Ei Sei's unification is THE right answer to end the warring states era.. like not at all what he's going for. He's simply shown that it was the idea that is prevailing, but there are other ideas. But if one wants to go deeper, the argument would be stronger for Hara supporting Ryofui & Riboku's claims rather than Ei Sei's claim. Because Ei Sei is the only one who fails to acknowledge that his unification plan won't be fucked up by the generations after him, despite Ryofui pointing it out. Riboku & Ryofui are well-ware their shit won't last.. but despite that it's better than slaughtering millions for something that also won't last for them. The very argument Ei Sei makes against Riboku "what guarantee is there that the alliance will last after we are long gone?" is the same argument that Ei Sei fails to uses upon himself. Now that's me being extremely critical. But Hara really isn't picking any sides, it's up to the readers to discuss/debate about what they think is the better answer for China.


Ei Sei's answer seems nice when it comes to paper/in a manga, however, once you put yourself in the shoe of a Zhao citizen or citizen of any other states that has had their own cultures/family histories/etc etc...it's not an answer any of us would pick imo. Which leads us to the second part of this thread...

A long term complaint that I often hear fans in the KINGDOM fandom make is how Hara is not portraying Qin Shi Haung, Ei Sei, right based on the historical information we have on him. That Ei Sei historically is known as a tyrant, dictator, and etc, where as the guy in the manga is a good/nice guy. Well let's look at what made Qin Shi Huang, Ei Sei, into a being called a tyrant in real history.

These are the primary things that labeled Ei Sei as a tyrant historically.. which is pretty much right, that's a tyrant for you. But is Hara oblivious to this? Nope. He's pretty much setting it all up:


-> Strict laws / Burning of books of different cultures: In order for the laws to be applied to the entirety of China, the whole must be united into a single identity. And guess how Ei Sei will do that?? Same way he's uniting the nations, through force. He ain't gone peaceful make people accept the laws, as pointed out in the Qi King's talk with the servant, you can't one day go "this is no longer the Qin's rice, but the Zhao's rice now" and expect the people to accept it. So the set up for this has already been planted by Hara. 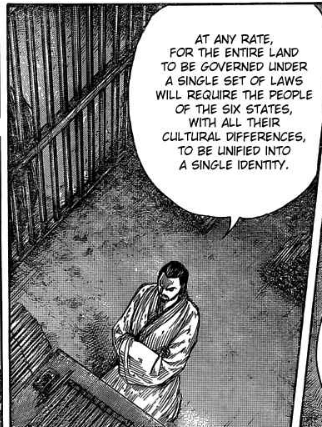 -> Burying alive Confucius scholars and etc: As RiShi points out here the war between Confucianism & Legalism will be a war in itself after the unification. Guess what happens in a war?? One side has to take a L. And what happens when they don't peacefully take a L?? Ding ding ding ding, they get forcefully put down by the stronger person. So all the terrible shit Qin did with the Confucius scholars after unification is already being set up.

Great Wall(s) of China: Not even relevant right now, doesn't happen years after the unification.


In the end all of the stuff that historically make Ei Sei renowned as a tyrant happens AFTER the unification, which is a decade+ away from the current storyline. However, make no doubt about it, even in the manga... Ei Sei will be renowned as a tyrant, Hara is clear on that. 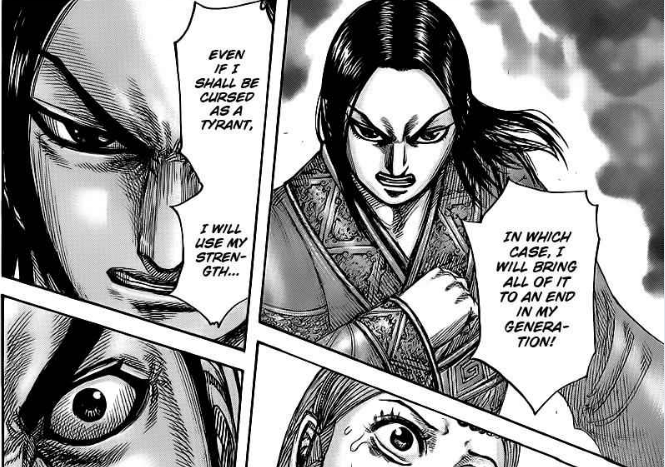 There is no sugarcoating anything from Hara's side. Now as far as the personality of Ei Sei, that is up to Hara and that is Hara's take on it, as we don't know much about the dude's personality, just like everyone else in history from 2000+ years ago. But fact remains Hara is clear that Ei Sei will be a mass slaughterer unlike anything to have ever existed in China, that he will be renowned as a tyrant down the line. He's also set up for majority of the things that label him as a tyrant post-unification. So Hara isn't trying to sugarcoat "oh you're supporting a nice guy trying to do a noble thing"... No if you're supporting Ei Sei's goal, then Hara is clear on it that you are supporting a mass murderer who is willing to be a tyrant long as it accomplishes his goal that he believes will end warfare.

I really wanted to talk about this because I often see this complaint from people who either just read up on the historical stuff about Qin shi huang, or got into the manga already reading into it and went "wait what, why is he being portrayed so nicely?"... yes Hara made up Ei Sei's personality, just as he did for every other historical figure in the manga, as there is no historical information about his personality like that. So Hara is not going against history for that, but taking creative liberty with a fictional piece that is trying to tell the story of China's unification. But when it comes to actual historical info of the character, Hara is making sure to set it all up.

Well that is going to be it from me here. Let me know y'alls opinion on this!!


Which method do you see as the best method of the three??